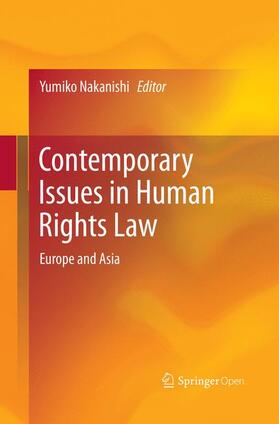 This book is published open access under a CC BY-NC-ND 4.0 license.

This book analyzes issues in human rights law from a variety of perspectives by eminent European and Asian professors of constitutional law, international public law, and European Union law.

As a result, their contributions collected here illustrate the phenomenon of cross-fertilization not only in Europe (the EU and its member states and the Council of Europe), but also between Europe and Asia. Furthermore, it reveals the influence that national and foreign law, EU law and the European Convention on Human Rights, and European and Asian law exert over one another.

The various chapters cover general fundamental rights and human rights issues in Europe and Asia as well as specific topics regarding the principles of nondiscrimination, women’s rights, the right to freedom of speech in Japan, and China’s Development Banks in Asia.

Protection of human rights should be guaranteed in the international community, and research based on a comparative law approach is useful for the protection of human rights at a higher level. As the product of academic cooperation between ten professors of Japanese, Taiwanese, German, Italian, and Belgian nationalities, this work responds to such needs.

Part I Human Rights in Europe.- 1 Mechanisms to Protect Human Rights in the EU's External Relations (Yumiko Nakanishi) .- 2 Fundamental Rights Regimes in European Union: Contouring their Spheres (Ferdinand Wollenschläger) .- 3 Human Rights Protection in the EU and Sovereign Rights of the Member States: On the Functioning of EU Citizenship (Noriko Ofuji) .- Part II Human Rights in Asia.- 4 Protection of Fundamental Rights and the Role of the Judicial Branch in Japan (Masahito Tadano).- 5 Does Formal Rank Matter? A Framework-Oriented View on the Binding Force of International Human Rights Law on Constitutional Law (Shu-Perng Hwang).- 6 The Asian Region and the International Criminal Court (Hitomi Takemura).- Part III Special Topics of Human Rights in Europe and Asia .- 7 The Principle of Non-discrimination under the European Convention on Human Rights and the EU Charter on Fundamental Freedoms (Niels Petersen).- 8 Women's Rights and Gender Equality in Europe and Asia (Sara De Vido).- 9 Guarantee of the Right to Freedom of Speech in Japan-Comparison with Doctrines in Germany (Takashi Jitsuhara).- 10 China's Development Banks in Asia: A Human Rights Perspective (Matthias Vanhullebusch).- Index.