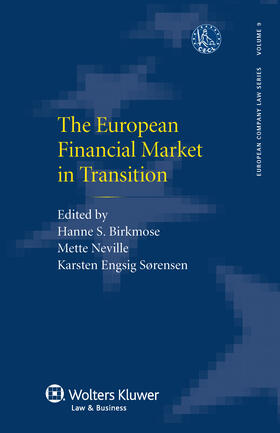 Substantial changes are taking place in the European financial market. This is partly due to developments in the markets (including the financial crisis of recent years), and partly due to the changes in the regulatory agenda of the EU which involves review of several core directives and which also has resulted in two green papers on corporate governance and the report from the Reflection Group.

The aim of this book is twofold. First, to describe and analyse some of the most important changes that have emerged in Europe in recent years, and second, analyse whether more regulatory changes are being called for.

Focusing on three themes – takeovers, shareholder democracy, and the reshaping of the framework for the European financial market – in this milestone volume 22 European academics, practitioners, and policymakers describe and analyse the most important recent changes and emerging trends in the market, ist regulation, and ist relation to corporate governance and company law.

Among the issues treated in depth are the following:

- the need for a reform of the Takeover Directive;

- disclosure by companies of information on barriers to takeovers;

- the efficiency of the ‘comply and explain’ principle;

- the enhanced focus on ‘sustainable returns and long-term performance’ in the Green Paper from
2011;

- the costs of shareholder activism;

- the principle of shareholder primacy in company law;

- hidden ownership and empty voting as a corporate governance challenge;

- the handling of systemic risk;

- regulation of the alternative fund industry;

- the fragmentation of trading venues and

This very thorough overview will be welcomed by both practitioners and academics interested in the working and development of the European financial market.