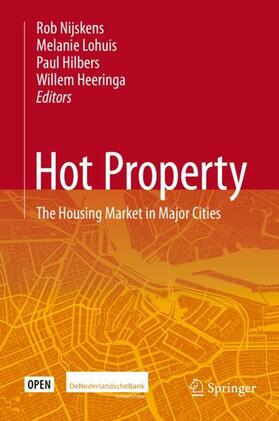 The Housing Market in Major Cities

This open access book discusses booming housing markets in cities around the globe, and the resulting challenges for policymakers and central banks. Cities are booming everywhere, leading to a growing demand for urban housing. In many cities this demand is out-pacing supply, which causes house prices to soar and increases the pressure on rental markets. These developments are posing major challenges for policymakers, central banks and other authorities responsible for ensuring financial stability, and economic well-being in general.This volume collects views from high-level policymakers and researchers, providing essential insights into these challenges, their impact on society, the economy and financial stability, and possible policy responses. The respective chapters address issues such as the popularity of cities, the question of a credit-fueled housing bubble, the role of housing supply frictions and potential policy solutions. Given its scope, the book offers a revealing read and valuable guide for everyone involved in practical policymaking for housing markets, mortgage credit and financial stability.

Foreword.-Preface.-Part I - The Rise of Major Cities: Causes and Consequences.-1. In the Age of Cities: The Impact of Urbanisation on House Prices and Affordability.-2. Tackling London's Housing Crisis.-3. The Housing Market in Major Dutch Cities.- Part II - Is There a Bubble in Major Cities?.-4. Regional House Price Differences: Drivers and Risks.-5. A Tale of Two Cities: Is Overvaluation a Capital Issue?.-6. Towards a Global Real Estate Market? Trends and Evidence.-7. Managing House Price Booms: Evolution of IMF Surveillance and Policy Advice.-Part III - Housing Supply in Urban Areas.-8. The Macroeconomic Implications of Housing Supply Restrictions.-9. Some Brief Thoughts on Housing Supply and Policy.-10. The Smouldering Issue.-11. Housing Markets in Scandinavia: Supply, Demand and Regulation.-12. The Relationship Between Supply Constraints and House Price Dynamics in the Netherlands.-Part IV - Policy responses.-13. The Dutch Housing Agenda.-14. Financial Stability and Housing Markets in Large Cities: What Role for Macroprudential Policy?.-15.Soaring House Prices in Major Cities: How to Spot and Moderate Them.-16. The Korean Housing Market: Its Characteristics and Policy Responses.-17. House Prices and Financial Stability: An Australian Perspective.-18. Exploding House Prices, Unaffordability in Urban Housing Markets - Explanations and Policy Solutions for the Netherlands.

Nijskens, Rob
Dr. Rob NijskensRob is an economist in the Financial Stability Division of DNB since 2012, specializing in analyzing financial stability risks in commercial and residential real estate markets. Together with Melanie Lohuis and Willem Heeringa he authored the 2017 DNB Occasional Study "The housing market in major Dutch cities". He has also written extensively on commercial real estate, both in policy and academic contexts. His academic work has appeared in the Journal of Banking and Finance and the Handbook of Central Banking, Financial Regulation and Supervision. Next to his work on real estate, Rob conducts macroprudential analysis and performs research on early warning models. He also teaches macro- and financial economics at Tilburg University.Rob holds a Master's degree in International Economics and Finance from Tilburg University and a PhD in Economics from CentER, Tilburg University.
Melanie LohuisMelanie is a policy advisor in the Financial Stability department at the Netherlands Bank (DNB). She is the author of the Occasional Study "The housing market in major Dutch cities" (with Rob Nijskens and Willem Heeringa; DNB Occasional Studies Vol. 15-1, 2017). She also co-organized the high-level DNB seminar 'Hot property: the housing market in major cities', which brought together high-level policy makers, supervisors and academics from around the globe to address the challenges posed by rising house prices in major cities. Melanie has been working at DNB since 2014. Before she took up her current position in the Financial Stability department, she has been working in insurance supervision, payments policy and supervision policy. Prior to this, she conducted policy analysis at a strategic consultancy firm. Melanie studied International Economics & Business at the University of Groningen (BSc, MSc).
Prof. Dr. Paul HilbersPaul was appointed Director Financial Stability at the Netherlands Bank (DNB) in May 2015. He is a member of the Financial Stability Board's Standing Committee on Assessment of Vulnerabilities and alternate member of the BIS Committee on the Global Financial System. In addition, he is the Secretary of the Dutch Financial Stability Committee, a member of the Council of the Netspar Foundation and an external member of the Audit Committee of the Ministry of Foreign Affairs.Before taking up his current position, Paul was Director of Supervision Policy at DNB. He has been a member of the Basel Committee and (co-) chair of the Task Forces on Impact & Accountability of Banking Supervision and Sovereign Exposures. Earlier in his career, he worked at the International Monetary Fund (IMF) in Washington for over 15 years. During that period he served as Manager in the IMF's Monetary and Capital Markets Department and Division Chief and Mission Chief in the European Department. Paul Hilbers was appointed part-time professor at Nyenrode Business Universiteit (NBU) in 2010. His field is Financial Sector Supervision and his chair is part of the Supervision Academy at NBU. Paul specializes in research that contributes to the further development of supervision and regulation of the financial sector. Paul studied Mathematics at the University of Utrecht (BA) and Econometrics at the Free University in Amsterdam (MA), where he also obtained his PhD in International Economics. He has published extensively on monetary, fiscal and financial sector issues. Dr. Willem HeeringaWillem is head of Macroprudential Analysis and Policy in the Financial Stability Division of DNB since 2013. Before taking up his current position, he was head of Economic Policy in the Economics and Research Division of DNB. Willem holds a Master's degree in Monetary Economics from Groningen University and a PhD in Economics from Tilburg University. Willem has published on fiscal, pension and housing issues.