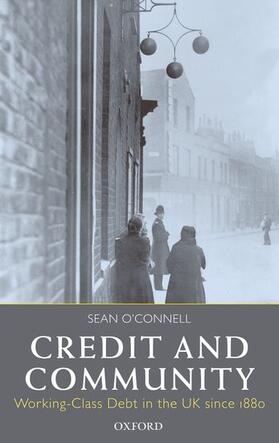 O'Connell Credit and Community: Working-Class Debt in the UK Since 1880

O'Connell Credit and Community: Working-Class Debt in the UK Since 1880

Credit and Community examines the history of consumer credit and debt in working class communities. Concentrating on forms of credit that were traditionally very dependent on personal relationships and social networks, such as mail-order catalogues and co-operatives, it demonstrates how community-based arrangements declined as more impersonal forms of borrowing emerged during the twentieth century.

Tallymen and check traders moved into doorstep moneylending during the 1960s, but in subsequent decades the loss of their best working class customers, owing to increased spending power and the emergence of a broader range of credit alternatives, forced them to focus on the 'financially excluded'. This 'sub-prime' market was open for exploitation by unlicensed lenders, and Sean O'Connell offers the first detailed historical investigation of illegal moneylending in the UK, encompassing the 'she
usurers' of Edwardian Liverpool and the violent loan sharks of Blair's Britain.

O'Connell contrasts such commercial forms of credit with formal and informal co-operative alternatives, such as 'diddlum clubs', 'partners', and mutuality clubs. He provides the first history of the UK credit unions, revealing the importance of Irish and Caribbean immigrant volunteers, and explains the relative failure of the movement compared with Ireland.

Drawing on a wide range of neglected sources, including the archives of consumer credit companies, the records of the co-operative and credit union movements, and government papers, Credit and Community makes a strong contribution to historical understandings of credit and debt. Oral history testimony from both sides of the credit divide is used to telling effect, offering key insights into the complex nature of the relationship between borrowers and lenders.

O'Connell, Sean
Sean O'Connell first monograph - The car in British society: class, gender and motoring (Manchester University Press, 1998) was part of the shift in British social and cultural history away from the study of production towards the analysis of consumption and consumers. His more recent projects have continued this interest. Amongst topics he has analyzed have been the history of men's consumer magazines, and the history of `joyriding.' He has published his work in
journals such as Economic History Review, Twentieth Century British History, and the British Journal of Criminology. His research has been supported by grants from the ESRC, the Leverhulme Trust, and the AHRC. His interest in the issue of consumer credit began with his co-authorship (with Dilwyn Porter
and Richard Coopey) of Mail order retailing in Britain: a business and social history (Oxford University Press, 2005) and culminates with this monograph on working class experiences of consumer credit since 1880.