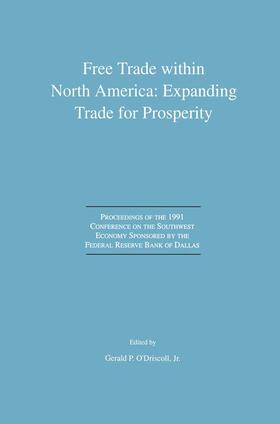 s countries around the globe were rediscovering political freedom, speakers at the Federal Reserve Bank of Dallas' fourth annual South­ A west Conference called for greater economic freedom-free trade in markets free of artificial barriers and misguided regulations, free trade through­ out a continent (perhaps a hemisphere) that has discarded unnecessary restraints and is poised to emerge as a preeminent competitive force in the 21st century. The Dallas Fed conference, titled "Beyond the Border: Expanding Trade for Prosperity" and held October 24-25, 1992, brought together several hundred participants interested in the possibility of free trade throughout North America and beyond. "How far south can we go?" conference speaker Javier Murcio asked. His answer: "As far as economic reform takes hold. " Around the globe, countries were becoming engulfed in what Henry an "absolute prairie fIre of democracy. " And one of the fIrst Cisneros called places many nations were attempting to exercise this new-found political freedom was in the marketplace. As Richard Fisher put it: ". market capitalism is a universally accepted dogma. " "This world. is becoming one interdependent marketplace. State and national boundaries have become meaningless. No longer are there such things as domestic or foreign fIrms. Decisionmakers can be anywhere they wish to be because computerization and telecommunications allow people to be every­ where at once," Fisher said.

One-Beyond the Border: Expanding Trade for Prosperity.- Understanding the Global Community in the 21st Century.- The Benefits of Free Trade.- Free Trade: The New Alternative for Growth in the 1990s.- The Invisible Hand versus the Iron Fist.- Two-Opening International Trade: The North-South Connection.- U.S.-Latin American Trade Relations: Past, Present and Future.- Toward Free Trade: How Far South Can We Go?.- Reform and Liberalization of the Financial System in Mexico.- Two Questions and Answers.- Three-Opening International Trade: The Hemisphere and Beyond.- Canadian Business Perspectives on Trade Liberalization.- Trade Policy and Income Distribution.- Prospects for U.S.-Mexico Free Trade.- Three Questions and Answers.- Four-Obstacles to Commerce.- Interstate Obstacles to Commerce.- Transportation, Regulation and International Trade.- Four Questions and Answers.- Five-Important Issues for the Southwest.- The Southwest Economy: What the Future Holds.- Important Issues for the Southwest: A Panel Discussion.