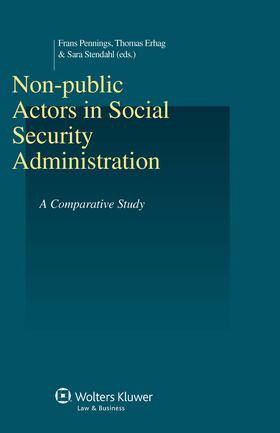 Although it is well-known that administration of social security is a sensitive political issue, the great variety of this type of administration makes it difficult for researchers to seek meaningful patterns that can lead to useful knowledge. Fortunately, this book takes an important step in the approach to the problem. Its focus is on the role of non-public actors – primarily social partners (employers’ organizations and trade unions), employers, and private bodies (e.g., insurance companies and funds) – in determining the content, decision-making, and supervision of social security schemes. The editors asked a group of well-qualified researchers from countries of varying types of social security and welfare systems to describe and analyse the role of non-public actors in their national systems from a comparative point of view. The countries covered are Germany, France, Finland, the Netherlands, Denmark, Sweden, United Kingdom, Czech Republic, Spain, and the United States. Administration of benefits for old age, sickness and disability, unemployment, and health care is studied, with an overall interest in the relationships between the involvement of non-public actors, the state, and the insured or covered persons. The pattern that appears sheds new light on such elements as the following:
factors that influence whether non-public actors have a role in the organization of a social security system
at what level involvement of non-public actors takes place;
prevailing views on, and experiences of, their roles;
the impact of their roles (or lack thereof) on the system, in terms of distribution of responsibilities, participation of the insured and covered persons, and access to benefits;
who pays for the scheme;
who decides to whom the scheme applies; and
who takes decisions on benefits in individual cases.
The ten country chapters are bookended by introductory and concluding essays that assess such underlying issues as transparency, the goals of the various interest groups, distribution of tasks, issues of democracy, and the degree of control by public bodies. In the last chapter a framework emerges that is helpful for explaining some of the developments noted in the country reports, and that should also prove useful for countries when considering changes in their own systems. The study clearly reveals problems that occur in social security administrations and choices countries can make in realizing their social security objectives.