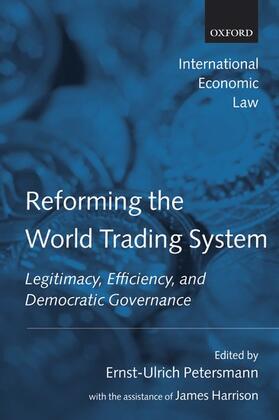 The 1994 agreement establishing the World Trade Organization (WTO) regulates over 95% of world trade amongst 148 member countries. The November 2001 Declaration of the Fourth Ministerial Conference of the WTO in Doha, Quatar, has launched the Doha Development Round of multilateral trade negotiations in the WTo on 21 topics aimed at far-reaching reforms of the world trading system. On August 1st 2004, the WTO General Council reached agreement on a detailed Doha Work
program with the aim of concluding negotiations in 2006.

This volume provides discussion and policy recommendations by leading WTO negotiators and policy-makers, and analysis by leading economists, political scientists and trade lawyers on the major subjects of the Doha Round negotiations. Over 30 contributors explore the complexity of the world trading system and of the WTO negotiations for its reform from diverse political, economic and legal perspectives.