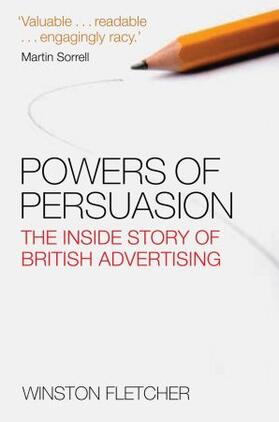 During much of the second half of the 20th century advertising in Britain led the world. Yet no history of British advertising covering this heady period has previously been published. During those years advertising increasingly came to touch upon almost every aspect of every individual's life, and reached its peak as a proportion of the Gross National Product. It boosted economic growth and peoples' affluence. But at the same time the advertising industry was
frequently under siege, as politicians, pressure groups, and others constantly sought to restrain its influence - and often succeeded.
For several decades the creativity of British campaigns was preeminent around the globe. But Powers of Persuasion is not just about advertisements - it is about advertising. During those years Britain was also a world leader in setting industry benchmarks - innovating the account planning discipline, setting the standard for public service advertising, launching global advertising awards festivals, introducing the best system of advertising regulation, setting up both the world's
largest advertising archive and the world's most comprehensive on-line advertising research databank. These were the keystones on which British creativity was built. Simultaneously, major British advertising companies - particularly Saatchi & Saatchi and WPP - raced to the top of the global league.
Powers of Persuasion tells the authoritative story of this dynamic, exhilarating era, with pen portraits of the personalities involved, anecdotes, case histories, and essential data. Written (from the inside) by one of the industry's leaders, this is a book for all interested in advertising and its role in society, business, and the media.