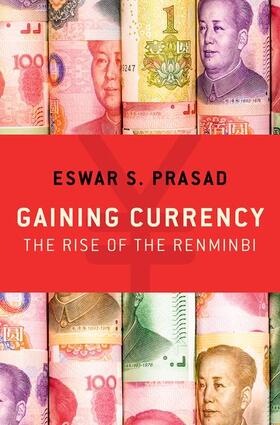 Prasad Gaining Currency: The Rise of the Renminbi

Prasad Gaining Currency: The Rise of the Renminbi

China's currency, the renminbi (RMB), has taken the world by storm. The RMB is well on its way to becoming a significant international currency, one that is used widely in international trade and finance. This book documents the RMB's impressive rise, with China successfully adopting a unique playbook for promoting its currency.

China's growing economic might, expanding international influence, and the rise of its currency are all intricately connected. The book documents how China's government has tied these goals together, enabling faster progress towards each of them. But there are many pitfalls ahead, both for China's economy and its currency. The book shows how the government has so far navigated its way around domestic and international dangers, but enormous risks still lie ahead.

The International Monetary Fund has elevated the RMB to the status of an official reserve currency, a currency that foreign central banks use to keep their rainy day funds. If China plays its cards right, with reforms that put its economy and financial markets on the right track, the RMB is going to become an important reserve currency that could rival some of the traditional reserve currencies such as the euro and the Japanese yen. But this book argues that there are limits to the RMB's
ascendance-the hype about its inevitable rise to global dominance is overblown.

The Chinese leadership's apparent commitment to financial sector and other market-oriented reforms-coupled with unambiguous repudiation of political, legal, and institutional reforms-sets the RMB on a clear course. It will attain the status of a reserve currency over time but has essentially given up its claim of being seen as a safe haven currency, one that investors turn to for safety. The RMB will erode but not seriously challenge the U.S. dollar's dominance in international
finance.

Prasad, Eswar S.
Eswar S. Prasad is Tolani Senior Professor of Trade Policy at Cornell University, Senior Fellow and New Century Chair in International Economics at the Brookings Institution, and Research Associate at the National Bureau of Economic Research. He is a former head of the IMF's China Division and author of The Dollar Trap: How the U.S. Dollar Tightened Its Grip on Global Finance.