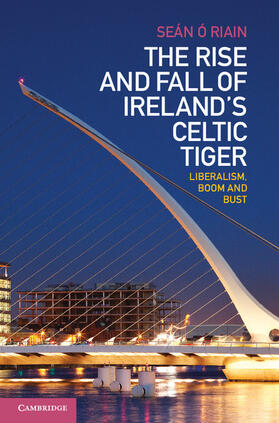 Ó Riain The Rise and Fall of Ireland's Celtic Tiger

Ó Riain The Rise and Fall of Ireland's Celtic Tiger

In 2008 Ireland experienced one of the most dramatic economic crises of any economy in the world. It remains at the heart of the international crisis, sitting uneasily between the US and European economies. Not long ago, however, Ireland was celebrated as an example of successful market-led globalisation and economic growth. How can we explain the Irish crisis? What does it tell us about the causes of the international crisis? How should we rethink our understanding of contemporary economies and the workings of economic liberalism based on the Irish experience? This book combines economic sociology and comparative political economy to analyse the causes, dynamics and implications of Ireland's economic 'boom to bust'. It examines the interplay between the financial system, European integration and Irish national politics to show how financial speculation overwhelmed the economic and social development of the 1990s 'Celtic Tiger'.

1. Liberalism in crisis; 2. Ireland: between development and crisis; 3. Capital: the triumph of finance; 4. Europe: between market and diversity; 5. National politics: governing fragmentation, fragmented governance; 6. Crisis: the difficult politics of development and liberalism.

Ó Riain, Seán
Seán Ó Riain is Professor of Sociology in the Department of Sociology and National Institute for Regional and Spatial Analysis (NIRSA) at the National University of Ireland, Maynooth. He is the author of The Politics of High Tech Growth (Cambridge University Press, 2004) which was awarded the James S. Donnelly book prize of the American Conference of Irish Studies in 2004. In 2011 he was awarded the prestigious European Research Council Starting Investigator Grant for a project titled 'New Deals in the New Economy: European Workplaces in an Era of Transformation'.