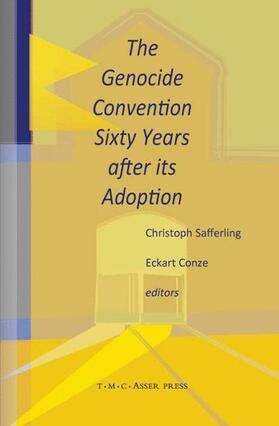 Safferling / Conze The Genocide Convention Sixty Years after its Adoption

Safferling / Conze The Genocide Convention Sixty Years after its Adoption

In 1948 the Convention on the Prevention and Punishment of the Crime of Genocide was adopted by the General Assembly of the United Nations. Thereby genocide was defined as an international crime.
Sixty years later, the prosecution of the crime of genocide raises a multitude of questions. Although genocide was not a crime during the Nuremberg Trial its historic roots rest with the persecution of Jews and other minorities by Nazi-Germany. Because of this historic focus the legal definition of genocide is difficult to apply to other conflicts.
Bringing together scholars and practitioners, this volume of essays examines the Genocide Convention from historic, legal and social science perspectives. Contemporary witnesses also report on their experiences of the Nuremberg, the Eichmann and the Auschwitz trials. Their contributions offer a range of insights on the practical problems and academic discussion surrounding the prosecution of genocide. And the combination of lawyers, historians and social scientists provides a broad assessment of the topic, from the origins of the Genocide Convention to its future implementation
No need to say that this book is an important contribution to the worldwide debate on and prosecution of genocide, making it valuable reading for academics and practitioners in international criminal law, historians, political scientists, students and all others interested in international law, the history of international law and international relations.
Christoph Safferling is Professor of Criminal and International Law at the Philipps-University of Marburg, Germany, and Director of the International Research and Documentation Center for War Crimes Trials (ICWC). Eckart Conze is Professor of Modern and Contemporary History at the University of Marburg and Deputy Director of the ICWC.