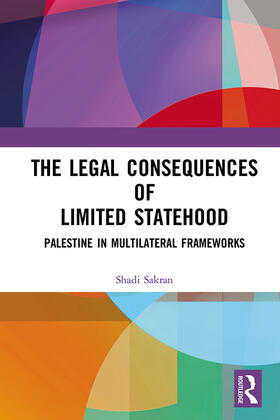 This book analyzes Palestine’s acceptance as a State in multilateral frameworks and its legal consequences.Using Palestine as a case study, this book argues that participation in a State-reserved regime is not determined by the traditional requisites of statehood. UNESCO membership unveils the acceptance of Palestine as a State for the limited purpose of the organization, without any immediate or implicit implications for the statehood of Palestine. Palestine’s accessions to various multilateral treaties demonstrate this argument as do its instruments of accession being accepted by the depositaries of both the United Nations Secretary-General and national Governments without requiring any clarification of the statehood question. This book also provides the first in-depth study of the legal relationship of the rights and duties of Palestine with different groups of State Parties; the recent dispute settlement brought by Palestine against the United States and Israel; and theoretical and practical challenges for Palestine in its acceptance as a State in multilateral frameworks.The book will be of interest to scholars and students of international law, legal theory, state law, and Middle East studies.

Chapter 5
Palestine’s Accession to Multilateral Treaties: The Circumvention of the Statehood Question by the Depositary
1. Introduction
2. Depositaries’ acceptance of the Palestinian instruments of accession
3. Multilateral treaties deposited with the UN Secretary-General
3.1. The "Vienna" clause:

3.3. Concluding observations
4. Multilateral treaties deposited with national Governments
4.1. The Geneva Conventions and their Additional Protocols
4.2. The Hague Conventions and the Permanent Court of Arbitration
4.2.1. The "subsequent agreement" for accession to the 1907 Hague Convention for the Pacific Settlement
4.2.2. The role of the depositary: absence of institutional guidelines
4.2.3. The PCA Council has no Authority to suspend Palestine’s accession
4.2.4. Concluding observations
4.3. Multiple national Governments as depositaries: The NPT and BWC
5. Conclusion
Bibliography

Chapter 6
Consequences of Palestine’s Accession to Multilateral Treaties: Legal Relationships, Dispute Settlements and Functions of a Limited State
1. Introduction
2. Consequences for different groups of State Parties
2.1. Consequences for "silent States": silence may be seen as an acquiescence
2.2. Consequences of "purported" accessions for opposing States
3. Dispute settlements: Palestine against the United States and Israel
3.1. Palestine at the gates of the ICJ: Palestine against the United States
3.2. Palestine’s inter-State complaint against the State of Israel
4. Acting like a State
4.1. Substantive functions
4.2. Procedural functions
4.2.1. Submitting national reports
4.2.2. Participating in treaties’ conferences
5. Conclusion
Bibliography

Chapter 7
The Challenges for Palestine’s Participation as a State in Multilateral Frameworks: Imbalance, Occupation, and the Perceived Threat to the Peace Process
1. Introduction
2. Imbalanced participation in multilateral frameworks
2.1. Disadvantages compared to a formal State
2.2. Advantages compared to a formal State
3. Palestine as occupied territory
3.1. The requisite of effective control
3.2. Difficulties in implementing treaties’ provisions as a result of the occupation
4. Perceived threat to the peace process in the Middle East
5. Concluding observations
Bibliography