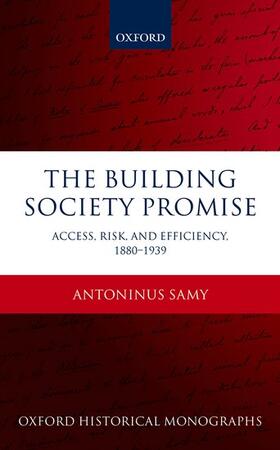 The permanent building societies of England grew from humble beginnings as a multitude of small and localized institutions in the nineteenth century to become the dominant players in the house mortgage market by the inter-war period. Throughout the nineteenth and early-twentieth centuries, the movement cultivated an image of being a champion of home ownership for the working classes, but housing historians have questioned whether building societies really lived up to
this claim. This study fills a major gap in the historiography of the movement by investigating the class profile of building society members, and how the design of different building societies affected their accessibility, efficiency, and risk-taking practices between 1880 and 1939. These themes
are explored using case studies of several building societies from this period and drawing upon extensive archival records.

The Building Society Promise shows that building societies did lend to working-class households before the First and Second World Wars, with some societies showing a greater commitment to working-class home ownership than others. What ultimately affected the outreach of individual societies was the quality of information they possessed, which in turn was largely determined by the types of agency networks they used to find and select borrowers. The phenomenal growth of some of these
institutions in the inter-war period, however, and the ensuing competition which emerged between them, brought about profound changes in their firm structure which impaired their ability to reach out to lower-income households as efficiently as before. The findings of this research are relevant to both past and
present debates about the optimal design of financial institutions in overcoming social exclusion in credit markets, and the deleterious effects that firm growth, market competition, and managerial self-interest can have on their performance and stability.

Samy, Luke
Antoninus Samy was born in Australia and educated at the University of Melbourne where he specialised in economics, mathematics, and statistics. Upon graduation, he worked for the Australian Bureau of Statistics as an econometrician, before going to the University of Oxford to undertake his doctoral studies in economic history. He was awarded the Doctor of Philosophy in 2011, and worked for a year as a postdoctoral research fellow at the Ashmolean Museum before he
entered religious life as a Dominican friar in the United States. He is currently studying for the Catholic priesthood at the Dominican House of Studies in Washington DC.