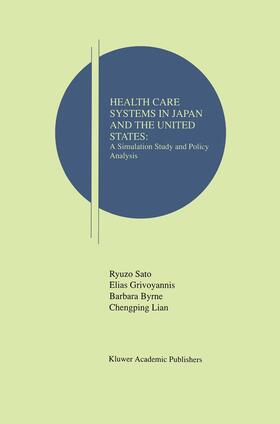 The health care sector has become a major component of the contemporary econo­ mies of Japan and the United States. It absorbs significant proportions of the GDP in both countries and places increasing stress on private, government and corporate budgets. As their income rises, the citizens ofJapan and the United States choose to allocate increasing portions of it on health care services because ofthe direct contri­ bution of health care services to prolonged life expectancy, reduced morbidity, or other indicators of improved health and well-being. The health care sector is a ma­ jor source ofemployment and affects the lives of all citizens. Adequate health care services are expected to have an important contribution to the quality of human life in any society. With so much at stake, arrangements for planning, financing, and operating health care service systems have increasingly come to be regarded as im­ portant economic and political issues. The political importance of health care is evidenced by the health care reform proposals of the Clinton administration in the United States and the deep involve­ ment of the government in the medical care security system in Japan. As policy­ makers in both countries look ahead to the coming decades, they realize that the imperatives of economic restructuring, globalization, and their rapidly aging socie­ ties will affect the way in which health care is organized, delivered, and financed.

Preface. 1. Overview. 2. Demographic Changes in Japan and the United States. 3. Health Care Services Utilization Profiles Among the Elderly. 4. Paternalism in Health Care for the Elderly. 5. Trends in Health Care Expenditures and Financing. 6. Our Approach to the Problem. 7. The Simulation Model. 8. Simulation Results. 9. Alternate Set of Assumptions. 10. Concluding Remarks and Policy. Appendix A: Mathematical Specificiation of the Model. Appendix B: Proof that Income Elasticity is Greater than One. Bibliography. Index.

Sato, Ryuzo
Ryuzo Sato is a C. V. Starr Professor Emeritus of Economics at the Stern School of Business, New York University. He was director of the Center for Japan U.S. Business and Economic Studies at the Stern School. Prior to becoming a Stern faculty member, he was a professor of economics at Brown University. Professor Sato also taught at Harvard University, The University of Tokyo, Kyoto University, and Bonn University. He was the founding chief editor of Japan and the World Economy, an international theory and policy journal. For more than 40 years, Professor Sato has divided his time between Japan and the United States, and he conducts research, gives lectures, and writes on the subject of Japan U.S. relations. Professor Sato, who was a Fulbright Scholar, received his B.A. in economics and his Dr. Economics from Hitotsubashi University in Tokyo, and his Ph.D. in economics from Johns Hopkins University. His principal areas of research interest are mathematical economics and economic growth.