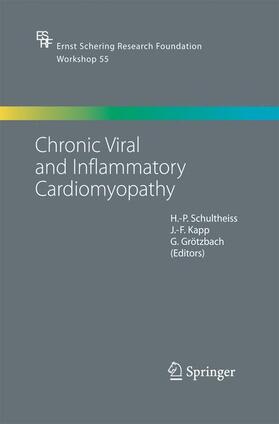 Following its tradition of promoting novel areas of scienti?c discourse, the Ernst Schering Research Foundation (ESRF) hosted this workshop on chronic viral and in?ammatory cardiomyopathy. In late October 2004, scientists from Canada, Germany, the Georgian Republic, Great Britain, Italy, Japan, the Netherlands, Israel, Sweden, and the United States ga- ered in Berlin to discuss their concepts, hypotheses, and latest ?ndings on myocarditis and cardiomyopathy. This expert meeting was held in cooperation with the German - search Foundation, which in the same year had supported transregional collaborative research activities entitled “In?ammatory Cardiomyo- thy – Molecular Pathogenesis and Therapy.” Organizing the workshop, our efforts strove to render tighter the network between the distinct disciplines involved in cardiomyopathy - search, building bridges between its molecular, pathogenetic, diagnostic, and therapeutic determinants. It all began as a story of a neighborhood, and we would like to express our hope that this long-term project, which will require much and - tensive cooperative work among the participants, will evolve to become a story of a good neighborhood.