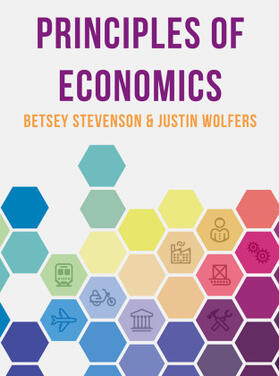 Betsey Stevenson and Justin Wolfers present a new synthesis of economic principles for a new generation of students. Their focus on useful economics employs compelling explanations and real-life examples to help students develop economic intuition and apply it to everyday decisions. The authors provide a fresh take on a wide range of principles topics and develop macroeconomics from its microfoundations in an engaging presentation that has drawn enthusiastic reviews from hundreds of instructors and thousands of students in pre-publication class-tests.

In Principles of Economics, students will learn how the basic tools of economics can be applied to decisions that range from personal and professional goals to public policy and the broader economy. Combining fundamental theory with modern applications, familiar examples, and plenty of opportunities to practice using economic tools, Principles of Economics helps students to develop economic insight.

- Online homework helps students get better grades with targeted instructional feedback tailored to the individual.
- Step-by-Step graphs break complex graphs and other figures into their component parts to help students understand how graphs are built and what they represent. Captions on each step help the students to understand what’s happening as the figures change.
- Decision Points allow students to explore their own decision-making process and how economic principles and thinking can inform their decisions. Students work step-by-step through decision-making scenarios, receiving feedback about how the economic principles did (or did not) play into their choices. Decision Points help students apply economic insights to their everyday lives.