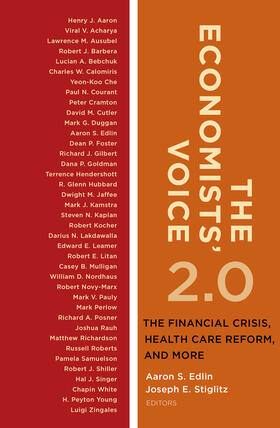 The Economists' Voice: Top Economists Take On Today's Problems featured a core collection of accessible, timely essays on the challenges facing today's global markets and financial institutions. The Economists' Voice 2.0: The Financial Crisis, Health Care Reform, and More is the next installment in this popular series, gathering together the strongest essays published in The Economist's Voice, a nonpartisan online journal, so that students and general readers can gain a deeper understanding of the financial developments shaping their world.

This collection contains thirty-two essays written by academics, economists, presidential advisors, legal specialists, researchers, consultants, and policy makers. They tackle the plain economics and architecture of health care reform, its implications for society and the future of the health insurance industry, and the value of the health insurance subsidies and exchanges built into the law. They consider the effects of financial regulatory reform, the possibilities for ratings reform, and the issue of limiting bankers' pay. An objective examination of the financial crisis and bank bailouts results in two indispensable essays on investment banking regulation after Bear Stearns and the positives and negatives of the Paulson/Bernanke bailout. Contributors weigh the merits of future rescues and suggest alternative strategies for addressing the next financial crisis. A final section examines a unique array of topics: the stability of pension security bonds; the value of a carbon tax, especially in fostering economic and environmental sustainability; the counterintuitive perils of net neutrality; the unforeseen consequences of government debt; the meaning of the Google book search settlement; and the unexploited possibilities for profit in NFL overtime games.

Part I: Health Care Reform1 The Health Care Reform Legislation: An Overview, by Chapin White2 The Simple Economics of Health Reform, by David M. Cutler3 The Economics, Opportunities, and Challenges of Health Insurance Exchanges, by Mark G. Duggan and Robert Kocher4 Can the ACA Improve Population Health?, by Dana P. Goldman and Darius N. Lakdawalla5 Systemic Reform of Health Care Delivery and Payment, by Henry J. Aaron6 How Stable Are Insurance Subsidies in Health Reform?, by Mark V. PaulyPart II: Financial Market Regulatory Reform7 Financial Regulatory Reform: The Politics of Denial, by Richard A. Posner8 Government Guarantees: Why the Genie Needs to Be Put Back in the Bottle, by Viral V. Acharya and Matthew Richardson9 How Little We Know: The Challenges of Financial Reform, by Russell Roberts10 Finding the Sweet Spot for Effective Regulation, by R. Glenn Hubbard11 A Recipe for Ratings Reform, by Charles W. Calomiris12 Should Banker Pay Be Regulated, by Steven N. Kaplan13 Fixing Bankers' Pay, by Lucian A. Bebchuk14 It Works for Mergers, by Aaron S. Edlin and Richard J. GilbertPart III: Financial Crisis and Bailouts15 Hedge Fund Wizards, by Dean P. Foster and H. Peyton Young16 Investment Banking Regulation After Bear Stearns, by Dwight M. Jaffee and Mark Perlow17 Why Paulson Is Wrong, by Luigi Zingales18 Dr. StrangeLoan: Or, How I Learned to Stop Worrying and Love the Financial Collapse, by Aaron S. Edlin19 Questioning the Treasury's $700 Billion Blank Check: An Open Letter to Secretary Paulson, by Aaron S. Edlin20 Auction Design Critical for Rescue Plan, by Lawrence M. Ausubel and Peter Cramton21 A Better Plan for Addressing the Financial Crisis, by Lucian A. Bebchuk22 Please Think This Over, by Edward E. Leamer23 Is Macroeconomics Off Track?, by Casey B. Mulligan24 If It Were a Fight, by Robert J. Barbera25 Comment on Barbera: Your Gift Will Make You Rich, by Casey B. MulliganPart IV: Innovations in Policy and Business26 Pension Security Bonds: A New Plan to Address the State Pension Crisis, by Joshua Rauh and Robert Novy-Marx27 Carbon Taxes to Move toward Fiscal Sustainability, by William D. Nordhaus28 Net Neutrality Is Bad Broadband Regulation, by Robert E. Litan and Hal J. Singer29 Trills Instead of T-Bills: It's Time to Replace Part of Government Debt with Shares in GDP, by Mark J. Kamstra and Robert J. Shiller30 The Google Book Settlement: Real Magic or a Trick?, by Pamela Samuelson31 The Stakes in the Google Book Search Settlement, by Paul N. Courant32 The NFL Should Auction Possession in Overtime Games, by Yeon-Koo Che and Terrence Hendershott

Edlin, Aaron
Aaron S. Edlin is the Richard W. Jennings Professor at the University of California, Berkeley, and holds professorships in both economics and law. He is also a research associate at the National Bureau of Economic Research. Formerly, he was the senior economist covering regulation, antitrust, and industrial organization on the President's Council of Economic Advisors. Joseph E. Stiglitz is a professor at Columbia University and former chief economist and senior vice president of the World Bank. Among his books are Escaping the Resource Curse and Globalization and Its Discontents, which has been translated into twenty-eight languages. In 2001, he was awarded the Nobel Prize in economics. With Aaron S. Edlin and J. Bradford DeLong, he is the coeditor of The Economists Voice: Top Economists Take On Todays Problems.