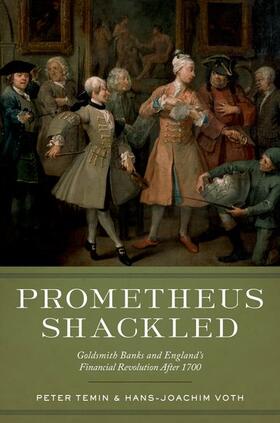 After 1688, Britain underwent a revolution in public finance, and the cost of borrowing declined sharply. Leading scholars have argued that easier credit for the government, made possible by better property-rights protection, lead to a rapid expansion of private credit. The Industrial Revolution, according to this view, is the result of the preceding revolution in public finance.

In Prometheus Shackled, prominent economic historians Peter Temin and Hans-Joachim Voth examine this hypothesis using new, detailed archival data from 18th century banks. They conclude the opposite: the financial revolution led to an explosion of public debt, but it stifled private credit. This led to markedly slower growth in the English economy. Temin and Voth collected detailed data from several goldsmith banks-Child's, Gosling's, Freame and Gould, Hoare's, and Duncombe and Kent.
The excellent records from Hoare's, founded by Sir Richard Hoare in 1672, offer particular insight.

Numerous entrants into the banking business tried their hand at deposit-taking and lending in the early 17th century; few survived and fewer thrived. Hoare's and a small group of competitors did both. Temin and Voth chart the growth of the successful banks in the face of frequent wars and heavy-handed regulations. Their new data allows insights into the interaction between financial and economic development. Government regulations such as (a sharply lower) maximum interest rate caused severe
misallocation of credit, and a misguided attempt to lighten the nation's debt burden led directly to the South Sea Bubble in 1720. Frequent wars caused banks to call in loans, resulting in a sharply slower economic growth rate. Based on detailed micro-data, the authors present conclusive evidence that
wartime borrowing crowded out investment. Far from fostering economic development, England's financial revolution after 1688 did much to stifle it — the Hanoverian "warfare state" was a key reason for slow growth during Britain's Industrial Revolution. Prometheus Shackled is a revealing new take on one of the most important periods of economic and financial development.