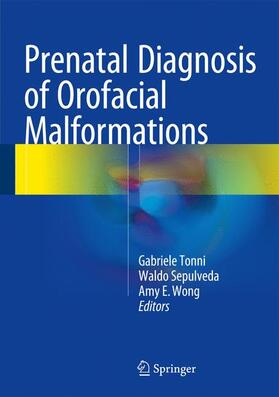 This book describes how different diagnostic techniques may facilitate the prenatal identification of orofacial malformations. The role of standard two-dimensional ultrasound is documented and explained, but detailed attention is also paid to the use of three-dimensional (3D) ultrasound, including the novel 3D reslicing technique, and to the value of complementary magnetic resonance imaging. The malformations considered include cleft lip, cleft lip and palate, ocular malformations, abnormalities associated with fetal aneuploidy, and tumors. These conditions are depicted in numerous high-quality images accompanied by thorough and informative descriptions of imaging findings. The excellence of the illustrative material and the caliber of the authors, who are leading international experts in the field, ensure that Prenatal Diagnosis of Orofacial Malformations will be an invaluable tool for obstetricians and gynecologists.

1. The Genetics of Facial Cleft.- 2. Evaluation of the Fetal Face in the First Trimester.- 3. The role of 2D/3D/4D Ultrasound in the Prenatal Assessment of Cleft Lip and Palate.- 4. 2D/3D/4D Ultrasound of the Fetal Face in Genetic Syndromes.- 5. Prenatal Diagnosis of Head and Neck Tumors.- 6. Micrognathia.- 7. Magnetic Resonance Imaging (MRI) in the Evaluation of the Fetal Face.- 8. The Fetal Brain in Fetuses with Orofacial Abnormalities.- 9. Development and Autospy Assessment of the head and Face.- 10. Postnatal Management of Cleft Lip and Palate.- 11. Cases.

Gabriele Tonni, PhD, MD, graduated Magna cum Laude in Obstetrics and Gynecology at the University of Parma. He is currently Consultant in Maternal-Fetal Medicine at Azienda Sanitaria Locale, Reggio Emilia, Italy. In the early 1990s, he has carried out research in the field of perinatal medicine investigating the role of intrapartum asphyxia and perinatal brain damage under the guidance of Professor James A. Low at the Queen's University in Kingston, Canada. After gaining work experience in the United Kingdom, where he was granted RCOG certification in minimally invasive gynecologic surgery, he started to practice prenatal ultrasound diagnosis. He was trained in fetal invasive procedure at Nottingham City Hospital, under the guidance of Professor David T. Liu. He holds the Diploma in Fetal Medicine, the highest degree awarded by the Fetal Medicine Foundation, London. He has produced a PhD thesis on first trimester screening for fetal aneuploidy at University "La Sapienza" in Rome in 2000, the first publication on this clinical issue in Italy. Dr. Gabriele Tonni has been devoted to develop applications for 3D ultrasound and fetal MRI in the antenatal detection of congenital anomalies, particularly to the study of fetal palate and orofacial malformations, in which he gained worldwide expertise. He has developed outstanding international collaborations and is currently involved in the applications of 3D virtual physical models of fetal abnormalities using 3D ultrasound volume and fetal MRI scan data. He has contributed to more than 100 publications in peer-reviewed journals and serves as reviewer to more than 40 international journals. He has been invited to attend many national and international congresses where he acted as chairman or lecturer and has attended the Fetal Medicine Center, Hospital Clinic, Barcelona University


Amy Wong is a Maternal-Fetal Medicine physician practicing at Palo Alto Medical Foundation in California, USA. She received her undergraduate degree at Princeton University, her medical degree at the University of California, San Francisco, and Obstetrics and Gynecology training at Stanford University. Her subspecialty training in maternal-fetal medicine was performed at Northwestern University, where she also received her Master of Public Degree.