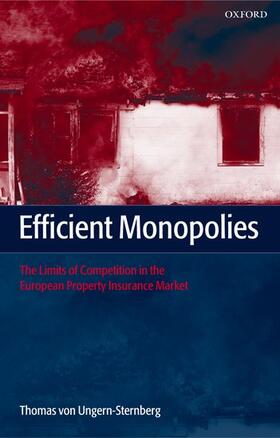 This book presents startling evidence that state monopolies can produce better outcomes than the free market. It provides an empirical comparison of the property insurance market in five European countries: Britain, Spain, France, Switzerland, and Germany. The market and cost structures of insurers in each country are described, and particular features of each market and the outcomes for customers examined. The regulatory frameworks vary widely from country to
country and so do the market outcomes, both in terms of premium level and in terms of available insurance cover.

In view of the increase in major floods and other forms of natural damage (such as subsidence) over the last decades, the non-availability of insurance cover in many competitive insurance systems is likely to become a major political issue. This book shows that state monopoly is an adequate policy response. Competitive insurance systems are shown to provide incomplete cover at a substantially higher cost. In mixed systems, where the private sector can obtain reinsurance from the state (such a
system is being tried in France) the state tends to end up paying most of the costs (it reinsures most of the bad risks) while the private insurance companies keep most of the premium income.

The book will be of interest to academic economists interested in privatization, regulation, the theory of the firm, and insurance; Policy-makers concerned with regulation and privatization; Insurance companies, regulators, and analysts.