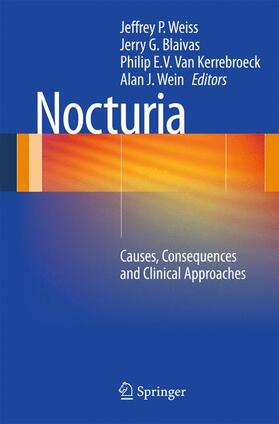 Nocturia: Causes, Consequences and Clinical Approaches is the first volume exclusively on the topic of nocturia and is designed to be a comprehensive treatise on the subject. The volume is organized into 11 chapters first introducing and defining nocturia and its impact to patients and society, followed by chapters dealing with predictors and risk factors; relationship to sleep disorders; overactive bladder; and water homeostasis. Therapeutic areas addressing nocturia are covered in specific chapters and include pharmacotherapy affecting the bladder, prostate and kidneys as well as behavioral therapy and surgical intervention. Separate chapters are devoted to alternative therapies as well as the impact of nocturia in the elderly. The volume closes with a chapter presenting avenues for future investigation into the etiology and management of nocturia. Clinical case scenarios inclusive of figures and tables illuminate the evaluation and management of patients with nocturia.

Nocturia: Causes, Consequences and Clinical Approaches will give physicians and related healthcare providers the background to understand the conditions causing nocturia, how nocturia affects society and the basis for its rational treatment. It will be used as a state of the art reference by urologists, urogynecologists, internists, nephrologists, pulmonologists, endocrinologists and sleep medicine specialists.