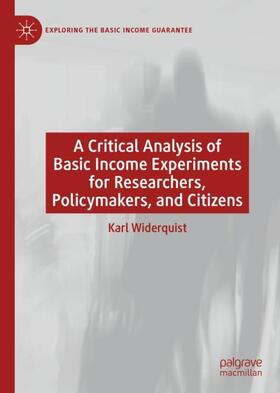 Widerquist A Critical Analysis of Basic Income Experiments for Researchers, Policymakers, and Citizens

The Devil's in the Caveats

Widerquist A Critical Analysis of Basic Income Experiments for Researchers, Policymakers, and Citizens

At least six different Universal Basic Income (UBI) experiments are underway or planned right now in the United States, Canada, the United Kingdom, Finland, and Kenya. Several more countries are considering conducting experiments. Yet, there seems to be more interest simply in having UBI experiments than in exactly what we want to learn from them. Although experiments can produce a lot of relevant data about UBI, they are crucially limited in their ability to enlighten our understanding of the big questions that bear on the discussion of whether to implement UBI as a national or regional policy. And, past experience shows that results of UBI experiments are particularly vulnerable misunderstanding, sensationalism, and spin. This book examines the difficulties of conducting a UBI experiment and reporting the results in ways that successfully improve public understanding of the probable effects of a national UBI. The book makes recommendations how researchers, reporters, citizens, and policymakers can avoid these problems and get the most out of UBI experiments.

Part one: UBI, available tests, testing problems, and past experimentsChapter 1: IntroductionChapter 2: Universal Basic Income and its more testable sibling, the Negative Income TaxChapter 3: Available testing techniquesChapter 4: Testing difficultiesChapter 5: The practical impossibility of testing UBIChapter 6: BIG experiments of the 1970s and the public reaction to themChapter 7: New experimental findings 2009-2013Part Two: The place of experiments in the political economy of UBIChapter 8: Why UBI experiments cannot resolve much of the public disagreement about UBIChapter 9: The political economy of the decision to have a UBI experimentChapter 10: The chain of misunderstanding between experimenters and their nonspecialist audienceChapter 11: Overcoming spin, sensationalism misunderstanding, and the streetlight effectPart Three: From the debate to the testChapter 12: The bottom lineChapter 13: Identifying important empirical claims in the UBI debateChapter 14: Claims that don't need a testChapter 15: Claims that can't be tested with available techniquesChapter 16: Claims that can be tested but only partially, indirectly, or inconclusivelyChapter 17: From the dream test to good tests within feasible budgets