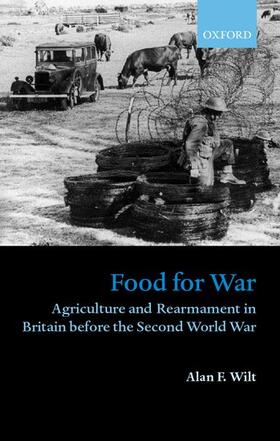 Wilt Food for War: Agriculture and Rearmament in Britain Before the Second World War

Wilt Food for War: Agriculture and Rearmament in Britain Before the Second World War

Food for War is a ground-breaking study of Britain's food and agricultural preparations in the 1930s as the nation once again made ready for war. Historians writing about 1930s Britain have usually focused on the Depression, appeasement, or political, military, and industrial concerns. None have dealt adequately with another significant topic, food and agriculture, as the nation moved, albeit reluctantly, from peace to war. In this new account Alan F. Wilt makes right
this omission by examining in depth the relationship between food, agriculture, and the nation's preparations for war.

He reveals how food and agriculture became closely linked to rearmament as early as 1936; that the government's preparations in this sector, as contrasted with other areas of the economy, were relatively well-developed when war broke out in 1936; and that rural and farm interests well understood the effect that war would have on their way of life. He argues that food and agriculture need to be integrated into the more general historical discourse, for what happened in Britain in the 1930s not
only set the stage for World War II, but also contributed to a more robust agriculture in the decades that followed.