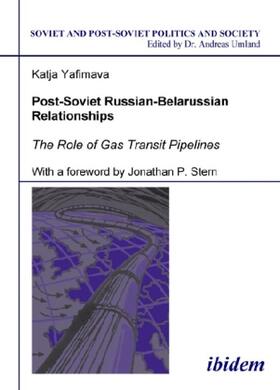 Until the February 2004 gas crisis when Gazprom cut off all gas flows via Belarus, the issue of Belarus as a gas transit route was not addressed seriously despite this country’s transiting around 20% of Russia’s gas exports to Europe. The gas crisis threatened the reliability of gas supplies to Europe. It demonstrated the necessity of bringing Belarus back into focus, explaining how and why the seemingly amicable Russian-Belarussian relationship had deteriorated to such an extent, and suggesting how the problem might evolve in the future.
This book shows that the reliability of the Belarussian gas transit routes is influenced by changes in the intensity of the Russian-Belarussian integration and explores whether Belarus is in a position to manage (or, indeed, survive) within the new, ‘commercial’ framework to which the gas issues had shifted following the failure to establish political union. The book predicts that the mainstay of Belarussian welfare is bound to deteriorate as Russia continues to increase its domestic gas prices at 20% annually as part of its energy strategy and in line with WTO requirements – thus, also making Belarus’s independent stance vis-à-vis Gazprom unsustainable. In order to secure gas prices at the level of, at least, Russian domestic prices, Belarus is likely to return to negotiating a joint venture operating the Belarussian transit network together with Gazprom. Yet, even if such a joint venture were to be formed, it would not eliminate the main reason of the unreliability of gas transit via Belarus – the weakness of the national economy. Therefore, unless Belarus embarks on reforms leading to substantial gas conservation, it will continue to be tempted to resort to unauthorised gas off-takes and non-payments undermining the reliability of transit.

Yafimava, Katja
Katja Yafimava was an FCO/OSI Visiting Student in Economics at, and holds an M.Phil. in Russian and East European Studies from, the University of Oxford. Currently, she studies towards a D.Phil. in Geography at the Oxford University Centre for the Environment.

Jonathan P. Stern is Director of the Gas Research Programme at the Oxford Institute for Energy Studies.