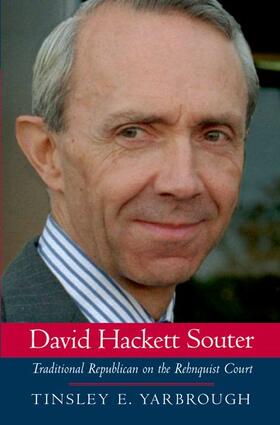 Traditional Republican on the Rehnquist Court

When the first President Bush chose David Hackett Souter for the Supreme Court in 1990, the slender New Englander with the shy demeanor and ambiguous past was quickly dubbed a "stealth candidate". Determined to avoid a repeat of the firestorm surrounding President Reagan's nomination of the controversial Robert Bork, Bush opted for Souter, who had, remarkably, produced only one law review article in his legal career. Souter, an obscure but well-respected New
Hampshire conservative, seemed unlikely to arouse the kind of passionate opposition that defined the Bork confirmation process. And, indeed, Souter was accepted onto the Court with little fuss. Today, fifteen years into his tenure, Souter remains as enigmatic and unpredictable as ever, a mystery even to avid
Court watchers. Who is David Hackett Souter and what will be his legacy on the Supreme Court? Sifting through Souter's opinions, papers of the Justice's contemporaries and other relevant records and interviews, esteemed Supreme Court biographer Tinsley Yarbrough here gives us the real David Souter, crafting a fascinating account of one of the heretofore most elusive Justices in the history of the Court. Though Souter's record on legal issues was generally conservative before his arrival on the
Court, his mixed views caused some concern among both the left and the right during the appointment process. His reclusive lifestyle and frugality added to his mystique, making him even more difficult to peg. His penchant for solitude and his seemingly narrow circle of close friends convinced some
that the middle-aged bachelor was out of touch with the sort of "real world" problems the nation's highest court regularly confronts. Court watchers soon realized—to their delight or dismay—that President Bush's "stealth" justice was a traditional New England Republican deeply tied to the party's historic roots in the union and civil rights—in stark contrast to most Reagan-Bush I appointees. On the bench, Souter has embraced a flexible, evolving, and highly pragmatic judicial style that
embraces a high regard for precedent—even liberal decisions of the Warren and Burger Courts with which he may have personally disagreed. Even more significantly, Souter has become a regular and very effective critic of the set of rulings via which his ostensible political brethren—Chief Justice
William Rehnquist, Antonin Scalia and Clarence Thomas—have abandoned precedent to assert their conservative vision. Ultimately, Yarbrough contends, Souter has become the principal Rehnquist Court opponent of the originalist, text-bound jurisprudence that many of the more conservative Justices profess to champion.