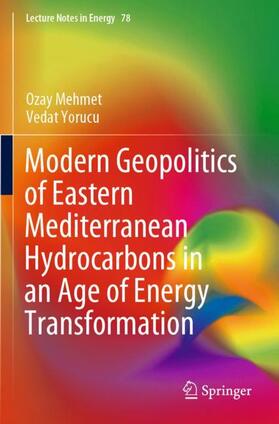 This book provides an in-depth assessment of the modern geopolitics of hydrocarbon resources in the territorial waters of the Eastern Mediterranean, highlighting the current conflicts and disputes in the maritime territories of Egypt, Israel, Lebanon, Cyprus, and Turkey. Further, these geopolitical aspects are analyzed within the broader context of the tensions between and competing interests of big powers such as the USA, Russia, and the European Union.
To what extent can major powers influence regional actors and guide them toward rational outcomes? To what extent can economic self-interest contain nationalistic impulses? What are the most practical and sustainable ways of promoting win-win scenarios? This book focuses on such questions and presents a number of clear policy guidelines to help the conflict-laden Eastern Mediterranean region gain a more peaceful and sustainable footing for the greater benefit of the peoples living there.

Yorucu, Vedat
Özay is a retired Canadian academic of Turkish Cypriot origin, the first from Turkish Cyprus to study at the London School of Economics. He did his doctorate in Economics at the University of Toronto as a Commonwealth Scholar.In 2004, after 35 years of teaching, he retired as Professor Emeritus of International Affairs, Norman Paterson School of International Affairs (NPSIA), Carleton University, Ottawa, Canada. He has been awarded the University's highest academic honor by being named Distinguished Research Professor for his teaching and research. Since retirement he has been the Lead Scholar in creating a Centre in Modern Turkish Studies in NPSIA,  funded by donations from the Canadian Turkish community. He has also worked at the Eastern Mediterranean University, North Cyprus, including a term as Dean of the Faculty of Business and Economics, 2008-10. He has received distinguished service awards by the Economics Associations in Turkey and North Cyprus.Over the years,  has specialized in Economic Development and International Economics with special reference to Southeast Asian economies such as Malaysia, Singapore, Indonesia and the Asian Tigers. He has published extensively with over 25 scholarly books and more than 100 articles in top academic journals. Most recently he has written on Cyprus and Turkey. He has also written historical novels. He consulted for several international agencies including the World Bank, UNDP, ILO, WHO, Asian Development Bank, and several Canadian, British and USA aid organizations. He lives in Ottawa with wife Karen Ann Mehmet. They have three sons and five grandchildren.  Professor Yorucu specializes in economic development, international economics, energy and construction economics. He is Vice President of the Cyprus Turkish Economics Association and formerly Chief Economic Advisor to the Minister of Finance and Minister of Economy and Tourism during 2004-2009.