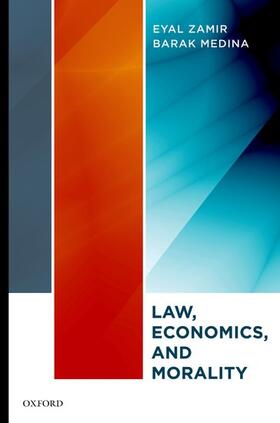 The first attempt to bridge the gap between economic analysis and common sense morality
Addresses the legitimacy of employing cost-benefit analysis (CBA) by agencies, including the advantages of using CBA and the importance of adding moral constraints to it
Discusses the legitimacy and appropriate scope of anti-terrorist measures, such as targeted killings

Law, Economics, and Morality examines the possibility of combining economic methodology and deontological morality through explicit and direct incorporation of moral constraints into economic models. Economic analysis of law is a powerful analytical methodology. However, as a purely consequentialist approach, which determines the desirability of acts and rules solely by assessing the goodness of their outcomes, standard cost-benefit analysis (CBA) is normatively objectionable.

Moderate deontology prioritizes such values as autonomy, basic liberties, truth-telling, and promise-keeping over the promotion of good outcomes. It holds that there are constraints on promoting the good. Such constraints may be overridden only if enough good (or bad) is at stake. While moderate deontology conforms to prevailing moral intuitions and legal doctrines, it is arguably lacking in methodological rigor and precision.

Eyal Zamir and Barak Medina argue that the normative flaws of economic analysis can be rectified without relinquishing ist methodological advantages and that moral constraints can be formalized so as to make their analysis more rigorous. They discuss various substantive and methodological choices involved in modeling deontological constraints. Zamir and Medina propose to determine the permissibility of any act or rule infringing a deontological constraint by means of mathematical threshold functions.

Law, Economics, and Morality presents the general structure of threshold functions, analyzes their elements and addresses possible objections to this proposal. It then illustrates the implementation of constrained CBA in several legal fields, including contract law, freedom of speech, antidiscrimination law, the fight against terrorism, and legal paternalism.

Zamir, Eyal
Eyal Zamir holds an LL.B. (1982) and Dr.Jur. (1989) from the Hebrew University of Jerusalem. He is an Augusto Levi Professor of Commercial Law at the Hebrew University, where he served as Dean of the Faculty of Law from 2002 to 2005. Professor Zamir was a visiting researcher at Harvard Law School (1990-1991), a visiting scholar at Yale Law School (1996-1997), a Senior Global Research Fellow at New York University School of Law (2005-2006), and a visiting professor at Georgetown University Law Center (2008, 2009). Professor Zamir's research interests include contract and

commercial law and theory; economic and behavioral analysis of law; law and normative ethics; and proprietary aspects of the Arab-Israeli conflict. He authored or edited ten books and published more than thirty articles in Israeli and American law reviews. Professor Zamir has been awarded numerous fellowships and prizes, including the Fulbright Researcher Award (1990-1991); the Rothschild Fellowship (1990-1991), and the Hebrew University President's Prize for Excellent Young Scholar named after Y. Ben Porat (1994, first recipient).

Medina, Barak
Barak Medina is Lawrence D. Biele associate professor at the Hebrew University of Jerusalem, and currently serves as the Dean of the Faculty of Law. He holds an LL.B. (1991) from Tel-Aviv University and LL.M. (1996) from Harvard Law School; he also holds a B.A. (1990) and M.A. (1992) in economics from Tel-Aviv University and Ph.D. in economics (1999) from the Hebrew University of Jerusalem. Professor Medina was a visiting professor at Columbia Law School (2006-2007). He served as Co-Editor of the Israel Law Review from 2003 to 2007. He also served as an adviser to the Constitution and Legal Affairs Committee, the Knesset (Israeli Parliament), on drafting a new Constitution for Israel, 2004-2005. Professor Medina's research interests include constitutional law and intolerant democracy, administrative law, economic analysis of law, and game theory and the law. He authored five books, including the latest editions of the most authoritative textbook on Israeli constitutional law, and published more than thirty articles in Israeli and American law journals.