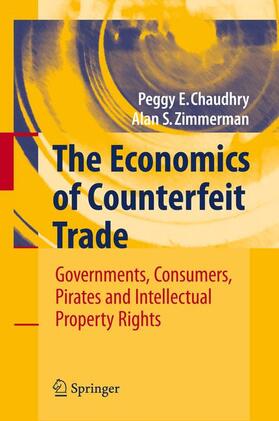 The expansion of world trade has brought with it an explosive growth in counterfeit merchandise. Estimates put the world total for counterfeit products at about one half trillion dollars annually, although it is impossible to accurately determine the true size of the counterfeit market. What is known is that this illicit trade has infected nearly every industry from pharmaceuticals to aircraft parts. Software and music piracy are easy targets widely reported in the media. In 2007, the Business Software Alliance (BSA) estimated that 38% of personal computer software installed worldwide was illegal and the losses to the software industry were $48 billion worldwide. The Recording Industry Association of America (RIAA) reported a 58% increase in the seizures of counterfeit CDs. Overall, a wide range of industries agree that there is a severe problem with the protection of intellectual property rights (IPR) throughout the world, yet there have been virtually no attempts to describe all aspects of the problem. This work aims to give the most complete description of various characteristics of the IPR environment in a global context. We believe a holistic understanding of the problem must include consumer complicity to purchase counterfeit products, tactics of the counterfeiters (pirates) as well as actions (or inaction) by home and host governments, and the role of international organizations and industry alliances. This book establishes the full environmental aspects of piracy, describes successful anti-counterfeiting actions and then prescribes measures IPR owners should take to protect their intellectual property.