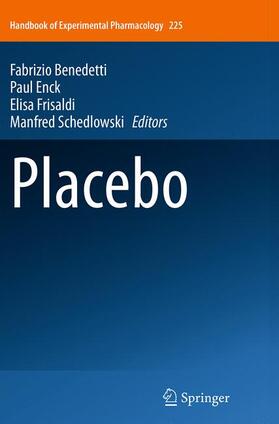 Due to the recent explosion of placebo research at many levels the Editors believe that a volume on Placebo would be a good addition to the Handbook of Experimental Pharmacology series. In particular, this volume will be built up on a meeting on Placebo which will be held in Tuebingen (Germany) in January 2013, and where the most prominent researchers in this field will present and exchange their ideas. The authors who will be invited to write chapters for this volume will be the very same speakers at this meeting, thus guaranteeing high standard and excellence in the topic that will be treated. The approach of the book is mainly pharmacological, including basic research and clinical trials, and the contents range from different medical conditions and systems, such as pain and the immune system, to different experimental approaches, like in vivo receptor binding and pharmacological/behavioral conditioning. Overall, the volume will give an idea of modern placebo research, of timely concepts in both experimental and clinical pharmacology, as well as of modern methods and tools in neuroscience.

Pain: Placebo and Nocebo Effects.-Placebo, Nocebo and Learning Mechanisms.- A Meta-Analysis of Brain Mechanisms of Placebo Analgesia.- Placebo Analgesia: Cognition of Perception.- Pain Related Negative Emotions and Placebo Analgesia.- How Positive and Negative Expectations Shape the Experience of Visceral Pain.-Placebo Effects in Idiopathic and Neuropathic Pain Conditions.-Emerging Models: Great Expectations: The Placebo Effect in Parkinsons's Disease.- The Effects of Placebos and Nocebos on Physical Performance.- Learned Placebo Responses in Neuroendocrine and Immune Functions.- Placebo Responses on Cardiovascular, Gastrointestinal, and Respiratory Organ Functions.- Placebo and Nocebo Effects in Itch and Pain. Clinical Practice and Clinical Trials: Clinical and Ethical Implications of Placebo Effects: Enhancing Patients' Benefits from Pain Treatment.- Traditional and Innovative Eperimental and Clinical Trial Designs and Their Advantages and Pitfalls.- Lessons to be Learned from Placebo Arms in Psychopharmacology Trials.-The Emperor's New Drugs: Medication and Placebo in the Treatment of Depression.