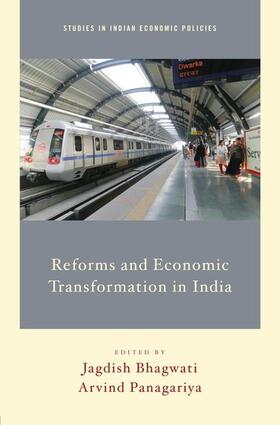 Reforms and Economic Transformation in India is the second volume in the series Studies in Indian Economic Policies. The first volume, India's Reforms: How They Produced Inclusive Growth (OUP, 2012), systematically demonstrated that reforms-led growth in India led to reduced poverty among all social groups. They also led to shifts in attitudes whereby citizens overwhelmingly acknowledge the benefits that accelerated growth has brought them and as voters,
they now reward the governments that deliver superior economic outcomes and punish those that fail to do so.

This latest volume takes as its starting point the fact that while reforms have undoubtedly delivered in terms of poverty reduction and associated social objectives, the impact has not been as substantial as seen in other reform-oriented economies such as South Korea and Taiwan in the 1960s and 1970s, and more recently, in China. The overarching hypothesis of the volume is that the smaller reduction in poverty has been the result of slower transformation of the economy from a primarily agrarian
to a modern, industrial one. Even as the GDP share of agriculture has seen rapid decline, its employment share has declined very gradually. More than half of the workforce in India still remains in agriculture. In addition, non-farm workers are overwhelmingly in the informal sector. Against this
background, the nine original essays by eminent economists pursue three broad themes using firm level data in both industry and services.

The papers in part I ask why the transformation in India has been slow in terms of the movement of workers out of agriculture, into industry and services, and from informal to formal employment. They address what India needs to do to speed up this transformation. They specifically show that severe labor-market distortions and policy bias against large firms has been a key factor behind the slow transformation. The papers in part II analyze the transformation that reforms have brought about
within and across enterprises. For example, they investigate the impact of privatization on enterprise profitability. Part III addresses the manner in which the reforms have helped promote social transformation. Here the papers analyze the impact the reforms have had on the fortunes of the socially
disadvantaged groups in terms of wage and education outcomes and as entrepreneurs.