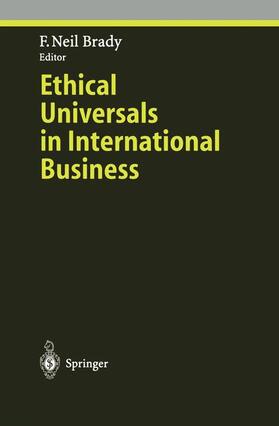 Increased understanding in international business grows both from an awareness of cultural differences as well as from an appreciation of underlying shared values across cultures. This volume focuses on the latter. It assembles the best thinking of scholars from around the world in an attempt to clarify and deepen our understanding of these ethical universals. Scholars from Germany, England, Canada, Japan, China, and the United States have contributed to this volume. They also represent diverse disciplines: economics, philosophy, business ethics, history, religion, education, and political theory. Nevertheless, they unite in their conviction that the most important values and principles in international business do no vary with geography.

Introduction: A Typology of Ethical Theories.- 1 Ethical Relativism and the International Business Manager.- 2 Corporate Social Monitoring in the United States, Great Britain, and South Africa: A Comparative Analysis.- 3 On the Social Responsibility of Corporations under Competition.- 4 Ecology and Ethics in the Economy.- 5 Ethical Universals, Justice, and International Business.- 6 Moral Universals as Cultural Realities.- 7 The Ethical Significance of Corporate Culture in Large Multinational Enterprises.- 8 The German Historical School and the Belief in Ethical Progress.- 9 Deriving Ethical Principles from Theories of the Firm.- 10 The Moral Boundary of International Business: A Postmodern Vision of Contemporary Neo-Confucianism.- 11 The Sodality of Good Character: 'Fraternity' and 'Sorority' as One Thing.- List of Authors.