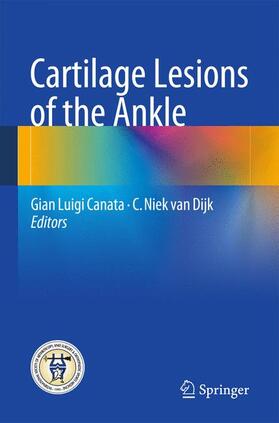 This booklet, published in cooperation with ISAKOS, is a concise, up-to-date guide and reference on the treatment of cartilage lesions of the ankle that will be of practical clinical value for specialists in sports medicine and sports traumatology. Different techniques and the management of various lesions are described step by step, guiding the practitioner through the entire spectrum of care from evaluation of the injury to successful recovery. Chondral and osteochondral lesions of the talus can present as a consequence of repetitive ankle injuries, causing chronic pain, recurrent swelling, and weakness and stiffness of the ankle joint. An accurate early diagnosis is required, using clinical evaluation, imaging techniques and arthroscopy of the ankle. In acute and non-displaced chondral and osteochondral lesions, conservative treatment is the mainstay. Surgery is recommended for unstable and persistent lesions and consists in several techniques focused on regeneration of the cartilage. Returning to play is possible after testing balance and proprioception, strength, range of motion, and agility.

Gian Luigi Canata, MD, is Director of the Center of Sports Traumatology and Arthroscopic Surgery, Koelliker Hospital, Turin, Italy, a position he has held since 1995. In 1999 the Center became an ISAKOS Teaching Center. Since 1980 Dr. Canata has also been a Member of the Medical Commission of the Italian Track and Field Federation and Director of Medical Services and Member of the Board of Directors of CUS (Centro Universitario Sportivo), Turin. From 1985 to 1995 Dr. Canata was Head of the Orthopaedics and Traumatology Section of the Institute of Sports Medicine of Turin. He served as Professor of Kinesiology at ISEF (Istituto Superiore di Educazione Fisica), Turin from 1989 to 2001 and as Professor of Sports Medicine at SUISM (Scuola Universitaria in Scienze Motorie), University of Turin from 2001 to 2012. He is currently President of the Sports Committee of SIGASCOT (Italian Society of Sports Traumatology). He is also a member of the ISAKOS Educational Committee and since 2010 has been a member of the EFOST Executive Board and General Secretary. He has previously served as a member of the ISAKOS Arthroscopy Committee and the ISAKOS Orthopaedic Sports Medicine Committee. Dr. Canata is the author of more than 100 publications.

Niek van Dijk, MD, PhD, is Professor of Orthopaedics and Head of the Orthopaedic Department of the Academic Medical Center Amsterdam, University of Amsterdam. Dr. van Dijk is a specialist in arthroscopic and reconstructive surgery of the knee, foot & ankle and sports medicine. His department has treated many professional athletes from all over the world. He undertook his professional training in Orthopaedic Surgery at the Academic Medical Center of the University Hospital of Amsterdam and in 1994 completed his PhD on "diagnostic strategies in patients with severe ankle sprain." In 1998 he founded the Orthopaedic Research Center Amsterdam (ORCA) and has been Director of the Center since then. He became a full professor in 2002. Dr. van Dijk is a past President of the Dutch Orthopaedic Society, the Dutch Arthroscopic Society and the Nordic Orthopaedic Federation. He is a board member of the International Society of Arthroscopy, Knee Surgery and Orthopaedic Sports Medicine (ISAKOS) and President of the European Society for Sports Traumatology, Knee Surgery and Arthroscopy (ESSKA). Diagnostic and therapeutic strategies for chronic ankle injuries have been a prominent focus of his research. Dr. van Dijk on average presents 25 international invited lectures each year and has published more than 250 scientific articles in indexed publications.