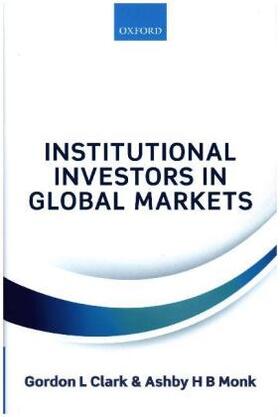 Institutional Investors in Global Market provides you with a comprehensive overview about what institutional investors do, how they do it, and when and where they do it; it is about the production of investment returns in the global economy.

Being a book about the production process, you learn about key issues found in the academic literature on the theory of the firm. In this case, the focus is on the global financial services industry, where the building blocks underpinning the study of industrial corporations are less relevant. You gain an understanding of how and why the production of investment returns differs from that of manufactured goods. You are provided with an analytical framework that situates financial institutions
within the complex web of the intermediaries that dominate developed financial markets. In summary, you gain further insights into analysis of the organization and management of institutional investors; as well as an analysis of the global financial services industry.

Clark, Gordon L.
Gordon L Clark DSc (Oxon) FBA is the Director of the Smith School of Enterprise and the Environment with cross-appointments in the Said Business School and the School of Geography and the Environment at Oxford University. He holds a Professorial Fellowship at St Edmund Hall, Oxford. He is as well, Sir Louis Matheson Distinguished Visiting Professor at Monash University's Faculty of Business and Economics (Melbourne) and a Visiting Professor at Stanford University.Previous academic appointments have been at Harvard's Kennedy School of Government, Harvard Law School (Senior Research Associate), the University of Chicago, Carnegie Mellon's Heinz School and Monash University. Other honours include being Andrew Mellon Fellow at the US National Academy of Sciencesand Visiting Scholar Deutscher Akademischer Austausch Dienst at the University of Marburg.Ashby Monk is the Executive and Research Director of the Stanford Global Projects Center. He is also an Honorary Research Associate at the University of Oxford and a Senior Advisor to the Chief Investment Officer of the University of California. His current research focus is on the design and governance of institutional investors, with particular specialization on pension and sovereign wealth funds. He published several articles and op-eds on institutional co-investing, pension funds andethical investment. His research and writing has been featured in The Economist, New York Times, Wall Street Journal, Financial Times, Institutional Investor, Reuters, Forbes, and on National Public Radio among a variety of other media.