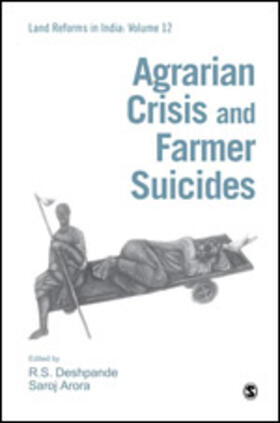 This volume is the twelfth in the series 'Land Reforms in India'. It focuses on the multi-dimensional aspects of the agrarian problem, examining it from the angle of public policy. A distinguishing feature of this collection is its holistic approach towards viewing farm sector distress, instead of looking for isolated causes and solutions.

The essays, based on the research and analyses conducted by academics from different parts of the country, examine the reasons for the growing agrarian crisis and increasing incidences of farmers' suicides in specific regions of the country. They take into account regional discrepancies in agricultural growth and implementation of policies in specific areas. In doing that, they also bring to light the various types of farm sector distress, which, in turn, leads to a better understanding of the whole situation. The compilation also attempts to define a systematic policy line.

Deshpande, R S
R S Deshpande is presently Director of the Institute for Social and Economic Change (ISEC), Bangalore, Karnataka. Professor Deshpande was a member of the Committee on Farmers’ Suicides in Karnataka, drafted the WTO Cell Report and Agricultural Policy-2006 of the Government of Karnataka. He was also the convener for preparing the manual for District Planning Team of the Planning Commission. He is member of an Expert Group on WTO and Agriculture of the Ministry of Commerce, Government of India. Among his important books are: Crops and Cultivation; NGOs and Farmers’ Movements; Moon in the Mirror; Farmer and the Minimum Support Prices in Karnataka; Rural Policy for Growth and Poverty Reduction, Glimpses of Indian Agriculture: Micro and Macro Aspects Vol. I and II and Where Water Seeps; Contract Farming and Tenancy Reforms. He was one of the three coordinators of the mega study on Farmers at the Millennium sponsored by Ministry of Agriculture, Government of India. His areas of specialisation include Agricultural Economics, Economic Policy, Land Issues, Development Economics and Applied Econometrics.