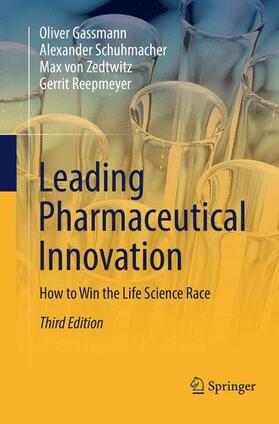 How to Win the Life Science Race

Pharmaceutical giants have been doubling their investments in drug development, only to see new drug approvals to remain constant for the past decade. This book investigates and highlights a set of proactive strategies, aimed at generating sustainable competitive advantage for its protagonists based on value-generating business practices. We focus on three sources of pharmaceutical innovation: new management methods in the drug development pipeline, new technologies as enablers for cutting-edge R&D, and new forms of internationalisation, such as outside-in innovation in the early phases of R&D.

Gassmann, Oliver
Prof. Dr. Oliver Gassmann is professor of technology management at the University of St. Gallen (Switzerland), and managing director of the Institute of Technology Management. After completing his PhD in 1996, he was head of corporate research at Schindler. He published over 400 papers in leading international management journals. In 2014, he was awarded the Scholary Impact Award by the Journal of Management, and in 2015 with the Citation Excellence Award of the Emerald Group. He also serves as a founder and advisor on several boards. Prof. Dr. Alexander Schuhmacher is professor at Reutlingen University (Germany). He teaches in business management and medical science. He officiates as Senator of Reutlingen University and he also serves as managing director of the Knowledge Foundation @ Reutlingen University. He worked for 14 years in various R&D positions in the pharmaceutical industry. As member of Nycomed's senior R&D management team, he headed the Strategic Planning & Business Support function and co-headed the R&D integration team following the merger of Nycomed and ALTANA Pharma. Prof. Dr. Max von Zedtwitz is professor at Kaunas University of Technology (Lithuania), and director of the GLORAD Center for Global R&D and Innovation. Previously he was a professor at Tsinghua, Peking University, Skoltech, and IMD, and a vice president at PRTM. In 2009 he was recognized by IAMOT as one of the fifty most influential innovation scholars worldwide. A frequent public speaker, he has appeared on television, and has been cited in the Economist, China Daily, the South China Morning Post and the New York Times. Dr. Gerrit Reepmeyer is co-founder & COO of Guardhat Inc., a startup based in Detroit (USA). Prior to that, he held various executive leadership positions in industrial and technology companies. He started his career in management consulting with McKinsey & Company. He has a PhD degree from the University of St. Gallen and was a research scholar at Columbia University in New York. He co-authored several books and publications on technology management, and he is co-inventor of five patents.