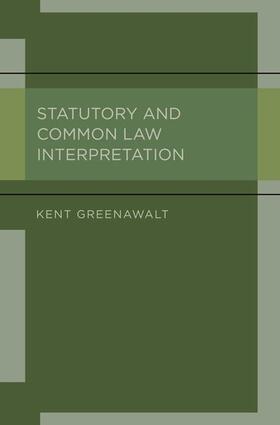 As Kent Greenwalt's second volume on aspects of legal interpretation, this book analyzes statutory and common law interpretation and compares the two. In respect to statutory interpretation, it first asks whether judges are "faithful agents" of the legislature or "independent cooperative partners." It concludes that the obvious answer is that neither simple categorization really fits-that the function of judges involves a combination of roles. The next issue
addressed is whether the intent of those in authority matters for interpreting the kinds of instructions contained in statutes. At the general level, the answer is "yes." This answer follows even if one thinks interpretation should concentrate on the understanding of readers, because readers themselves
would treat intentions as part of the relevant context of the language of statutes. It would take some special reasons, such as constitutional structure or unreliability, to discount actual intents of legislators and use of legislative history. The book argues that none of these special reasons are convincing. On the question whether judges should focus on the language of specific provision or overall purpose, both are relevant, and purpose should become more important as time passes. In an
analysis of various other features of statutory interpretation, the book claims that presidential signing statements should not have weight, that subsequent legislative actions short of new statutes should only occasionally carry importance, that "canons of interpretation," such as the rule of
lenity, can provide some, limited, guidance, and that there are special reasons for courts to adhere to precedents in statutory cases, but these should not yield any absolute rule. A chapter on administrative interpretation of statutes claims that the standards agencies apply should differ to a degree from those of courts and that judicial deference to those interpretations is ordinarily warranted.

A final chapter compares statutory and common law interpretation, similarities and differences, how each can affect the other, and the significance of having a legal system in which they both play prominent roles.

Greenawalt, Kent
Kent Greenawalt is University Professor at Columbia University, teaching at Columbia Law School. His publications include Religion and the Constitution, Vol. 1, Free Exercise and Fairness; Religion and the Constitution, Vol. 2, Establishment and Fairness; Conflicts of Law and Morality; Religious Convictions and Political Choice; Speech, Crime, and the Uses of Language; Law and Objectivity;
Fighting Words; Private Consciences and Public Reasons; Statutory Interpretation: Twenty Questions; and Does God Belong in Public Schools?