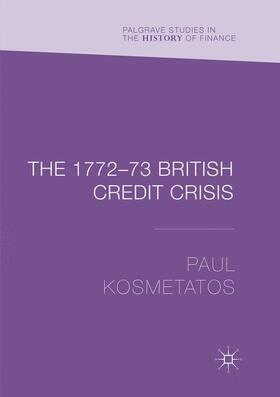 Nowadays remembered mostly through Adam Smith’s references to the short-lived Ayr Bank in the Wealth of Nations, the 1772-3 financial crisis was an important historical episode in its own right, taking place during a pivotal period in the development of financial capitalism and coinciding with the start of the traditional industrialisation narrative. It was also one of the earliest purely financial crises occurring in peacetime, and its progress showed an impressive geographical reach, involving England, Scotland, the Netherlands and the North American colonies.


This book uses a variety of previously unpublished archival sources to question the bubble narrative usually associated with this crisis, and to identify the mechanisms of financial contagion that allowed the failure of a small private bank in London to cause rapid and severe distress throughout the 18th century financial system. It re-examines the short and turbulent career of the Ayr Bank, and concludes that its failure was the result of cavalier liability management akin to that of Northern Rock in 2007, rather than the poor asset quality alleged in existing literature. It furthermore argues that the Bank of England’s prompt efforts to contain the crisis are evidence of a Lender of Last Resort in action, some thirty years before the classical formulation of the concept by Henry Thornton.

1. 'A Year of Confusion, Dismay, and Distress': The 1772-73 Financial Crisis and Its Potential Significance2. A Minsky Bubble? Economic Growth and the Financial Sector in 1763-723. 'Roguery', 'Stupidity', and Permissive Regulation: Asset Speculation and Speculative Projects in 1763-724. Propagation and Containment: Financial Contagion and the Lender of Last Resort in 1772-735. Impact and Resolution 6. Conclusion

Paul Kosmetatos is Lecturer for International Economic History at the University of Edinburgh. Prior to embarking in his academic career in History, he studied Materials Science and Engineering and spent a decade trading financial derivatives in the City of London.