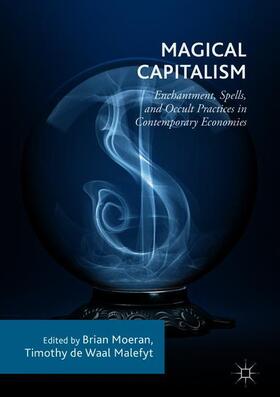 This volume of essays examines the ways in which magical practices are found in different aspects of contemporary capitalist societies. From contract law to science, by way of finance, business, marketing, advertising, cultural production, and the political economy in general, each chapter argues that the kind of magic studied by anthropologists in less developed societies – shamanism, sorcery, enchantment, the occult – is not only alive and well, but flourishing in the midst of so-called ‘modernity’. Modern day magicians range from fashion designers and architects to Donald Trump and George Soros. Magical rites take place in the form of political summits, the transformation of products into brands through advertising campaigns, and the biannual fashion collections shown in New York, London, Milan and Paris. Magical language, in the form of magical spells, is used by everyone, from media to marketers and all others devoted to the art of ‘spin’.
While magic may appear to be opposed to systems of rational economic thought, Moeran and Malefyt highlight the ways it may in fact be an accomplice to it.

1. Magical Capitalism: An Introduction2. Magical Contracts, Numinous Capitalism3. Exorcising Leverage: Sleight of Hand and the Invisible Hand in Islamic Finance4. Trickster's Triumph: Donald Trump and the New Spirit of Capitalism5. Fetish, Magic, Marketing6 Magical Names: Glamour, Enchantment, and Illusion in Women's Fashion Magazines7. The Magic of Paradox: How Advertising Ideas Transform Art into Business and the Ordinary into the Extraordinary8. The Business of Inspiration: A Magical Technology of Prefiguration9. The Magic Trick of Creative Capital: Competition, Confidence, and Collective Enchantment Among "Starchitects"10. Anthropology as Science Fiction, or How Print Capitalism Enchanted Victorian Science 11. The Magic of Mass Publicity: Reading Ioan Coulia12 Occult Economies, Revisited 13. The Enchantment Effect: A Semiotics of Boundary and Profit

Moeran, Brian
Brian Moeran is an anthropologist who specialises in cultural production and Japan. He has, in his time, been a helicopter pilot in Her Britannic Majesty's Royal Navy, a television comedian in Japan, and the first social scientist appointed to a Chair Professorship in language and literature at a UK university.
Timothy de Waal Malefyt is Clinical Associate Professor of Marketing at Gabelli Business School, Fordham University, USA. He is a corporate anthropologist who worked for 15 years in advertising agencies, including BBDO and D'Arcy. He blends consumer insights with anthropological theories, and is a former ballet dancer at the Joffrey.