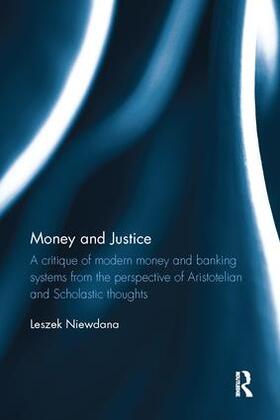 A critique of modern money and banking systems from the perspective of Aristotelian and Scholastic thoughts
1. Auflage 2017
ISBN: 978-1-138-06687-8
Verlag: Taylor & Francis Ltd

Money has always represented power. For Aristotle, this power was inseparable from the exercise of justice within a community. This is why issuance of money was the prerogative of the lawful authority (government). Such a view of monetary power was widespread, and includes societies as distant as China. Over the past several centuries, however, private interests increasingly tapped into the exercise of the money power. Through gradual shifts, commercial banks have gained a legally protected right to create money through issuance of debts. The aim of this book is to unravel various layers hiding the real workings of modern money and banking systems and injustices ingrained in them.
By asking what money really is, who controls it and for what purpose (why), the book provides insight into understanding of modern money and banking systems, as well as the causes of growing financialization of economies throughout the world, money manias and economic instability. The book also increases the awareness of injustices hidden in the workings of modern money and banking systems and the need for moral underpinnings of such systems. Finally, it suggests a money system which could immensely improve human, economic, and ecological conditions.

1. Introduction 2.Crisis of Fantasy Prosperity based on Debt 3. Usury Prohibition – an Ancient Principle of Financial Dealings 4.The Scholastic Theory of Usury and its Ultimate Marginalization 5.Abuse of Money Power6. Debt Money and Institutionalization of Usury7. The Myth of Money as Government Creation8. Moral Confusion over Debt9. Injustice in the Debt Money System 10.In Search of Solutions

Niewdana, Leszek (Fu Gen Catholic University, Taiwan, R.O.C.)
Leszek Niewdana, a Catholic priest from Poland, teaches mainly business ethics in the College of Management at Fu Jen Catholic University in Taiwan. He holds an MBA degree from the University of Southampton and a PhD in Christian Ethics from Heythrop College, University of London, England. Following the 2007-2009 financial tsunami, his interests have increasingly focused on ethical issues in financial and monetary systems.
.