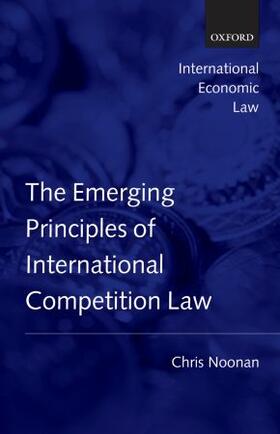 Many firms operate in complex legal environments where several States may regulate the same activity against a background of international law. International competition law has grown in importance as national economies have become more integrated, at the same time as national competition laws have proliferated and enforcement efforts have been strengthened. This system is beset with conflicts arising where States perceive that the way that another country does or
does not apply its competition law adversely affects its interests. This book clarifies the nature and origin of these conflicts, and explores possible ways to reduce them.

Noonan analyses the legal and policy issues associated with the control of restrictive business practices and anticompetitive mergers in international markets. The book discusses international cartels, dumping, private market access barriers, and mergers between international firms subject to multi-agency review. Subjects covered include the harmonization and coordination of competition laws, cooperation between enforcement agencies, international judicial assistance, and the role of trade
agreements and the World Trade Organization in international competition law. Noonan also examines the problems that States have in regulating conduct beyond their borders and the merits of a variety of potential responses.

He contends that there is an evolving international competition law system, albeit a somewhat chaotic one. States are only just beginning to see the system as a whole and are struggling to identify where their long-term interests lie. This book describes the elements of the system and their interactions, and explains how the system is evolving; suggesting what States, individually and collectively, could do to modify the system to their mutual advantage.

Noonan, Chris
Dr Chris Noonan is Senior Lecturer at the University of Auckland.