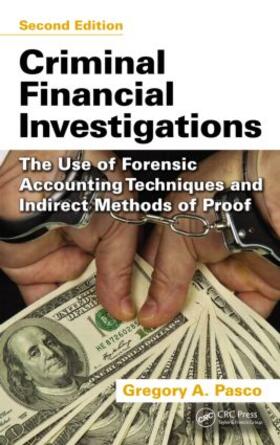 The Use of Forensic Accounting Techniques and Indirect Methods of Proof

Understanding the financial motivations behind white collar crime is often the key to the apprehension and successful prosecution of these individuals. Now in its second edition, Criminal Financial Investigations: The Use of Forensic Accounting Techniques and Indirect Methods of Proof provides direct instruction on the "how to" aspects of criminal financial investigations, taking readers through the different approaches used in gathering evidence and demonstrating how to present circumstantial evidence to a judge or jury in a simple and convincing manner. Simplifying how the financial pieces fit together, this text:

- Describes the requirements for legal acceptance of forensic accounting investigations

- Explores the pitfalls—and how to avoid them—in financial investigating

New Chapters in the Second Edition:

- What Is a Financial Investigation?

Written by a former Special Agent with the Criminal Investigation Division of the U.S. Internal Revenue Service, this volume sets out a successful methodology enabling readers to identify, pursue, and successfully prosecute financial white collar crime.

Pasco, Gregory A. (Colorado Technical University, Sioux Falls, South Dakota, USA)
Gregory A. Pasco is a professor of criminal justice at Colorado Technical University’s Sioux Falls, South Dakota, campus. Pasco spent more than 28 years in federal law enforcement as a special agent with the Criminal Investigation Division of the Internal Revenue Service (IRS). During this time, he conducted more than 100 financial criminal investigations. He worked in the IRS Organized Crime Unit in Detroit, Michigan, and with the Narcotics Task Forces in New Mexico and Ohio, and completed his federal law enforcement career in South Dakota. During his career, Pasco became qualified as an expert witness in criminal tax computations and was accepted as such in federal district court. He was also called upon to provide electronic surveillance and monitoring assistance in other investigations, and was qualified and testified as an expert witness in this area in federal district court. His other qualification as an expert witness was in the area of money laundering.