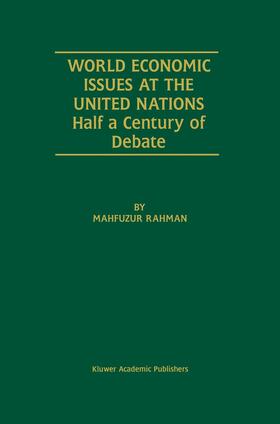 Half a Century of Debate

What were all those diplomats and bureaucrats from all over the world doing at the United Nations over the past half century when they were not debating how to prevent countries from tearing at each other or how to feed and shelter victims of natural or man-made disasters around the globe? A lot in fact, at least in terms of time spent and the sweep of issues debated. A major category of them were discussing a whole range of economic ques­ tions since the inception of the organization, while a slightly different category, with some members only changing hats, were talking about social Issues. Apart from operational activities, such as technical assistance to devel­ oping countries, and except for the well-publicized attempts at activism at as those on the environment or the status of international conferences such women, little is known outside the United Nations about the work of the or­ ganization in economic and social fields. Which is a pity. After all, the organization has often been given the dubious distinction of being the big­ gest talk show on earth. It is certainly pertinent to ask what it has been talking about over the last fifty-odd years.