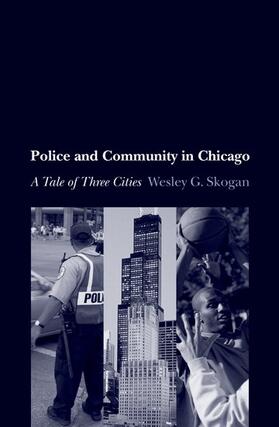 Skogan Police and Community in Chicago

A Tale of Three Cities

Skogan Police and Community in Chicago

In the early 1990s, Chicago, the nation's third largest city, instituted the nation's largest community policing initiative. Wesley G. Skogan here provides the first comprehensive evaluation of that citywide program, examining its impact on crime, neighborhood residents, and the police. Based on the results of a thirteen-year study, including interviews, citywide surveys, and sophisticated statistical analyses, Police and Community in Chicago reveals a city
divided among African-Americans, Whites, and Latinos. Each faced distinctive problems when community policing came to Chicago in 1993, and during the next decade the three communities took different routes. There were tremendous improvements in the citys predominately African-American districts, where crime
and fear dropped the most. The city's largely white neighborhoods were already solidly behind the police, yet they too registered significant gains. Under pressure from immigration, the Latino population cleaved in two with predominately Spanish-speaking areas falling behind on multiple measures of crime, disorder and neighborhood decay. Immigration will only continue to grow both in Chicago and around the world. Skogan thus concludes his pathbreaking work with a challenge for the future: more
effective ways of responding to the problems facing the city's newest immigrants must now be found.

Skogan, Wesley G.
Wesley G. Skogan is Professor of Political Science and Faculty Fellow of the Institute for Policy Research at Northwestern University. An expert on crime and policing, he is author of Community Policing, Chicago Style and On the Beat: Police and Community Problem Solving, two books based on his years of studying Chicago's Alternative Policing Strategy (CAPS). His research focuses on the interface between the public and the criminal
justice system.