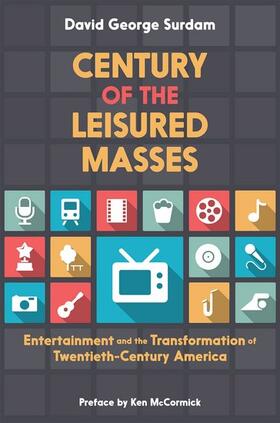 Surdam Century of the Leisured Masses

Entertainment and the Transformation of Twentieth-Century America

Surdam Century of the Leisured Masses

American living standards improved considerably between 1900 and 2000. While most observers focus on gains in per-capita income as a measure of economic well-being, economists have used other measures of well-being: height, weight, and longevity. The increased amount of leisure time per week and across people's lifetimes, however, has been an unsung aspect of the improved standard of living in America.

In Century of the Leisured Masses, David George Surdam explores the growing presence of leisure activities in Americans' lives and how this development came out throughout the twentieth century. Most Americans have gone from working fifty-five or more hours per week to working fewer than forty, although many Americans at the top rungs of the economic ladder continue to work long hours. Not only do more Americans have more time to devote to other activities, they are able to enjoy
higher-quality leisure. New forms of leisure have given Americans more choices, better quality, and greater convenience. For instance, in addition to producing music themselves, they can now listen to the most talented musicians when and where they want. Television began as black and white on small screens; within
fifty years, Americans had a cast of dozens of channels to choose from. They could also purchase favorite shows and movies to watch at their convenience. Even Americans with low incomes enjoyed television and other new forms of leisure.

This growth of leisure resulted from a combination of growing productivity, better health, and technology. American workers became more productive and chose to spend their improved productivity and higher wages by consuming more, taking more time off, and enjoying better working conditions. By century's end, relatively few Americans were engaged in arduous, dangerous, and stultifying occupations. The reign of tyranny on the shop floor, in retail shops, and in offices was mitigated; many
Americans could even enjoy leisure activities during work hours.

Failure to consider the gains in leisure time and leisure consumption understates the gains in American living standards. With Century of the Leisured Masses, Surdam has comprehensively documented and examined the developments in this important marker of well-being throughout the past century.

Surdam, David George
David Surdam is an Associate Professor of Economics at the University of Northern Iowa. He earned his doctorate under the supervision of Nobel-Prize Winner in Economics, Robert W. Fogel. He is the author of several books and articles pertaining to the economics of professional team sports and the American Civil War. He is currently working on books examining Major League Baseball during the 1920s and a history of business ethics.