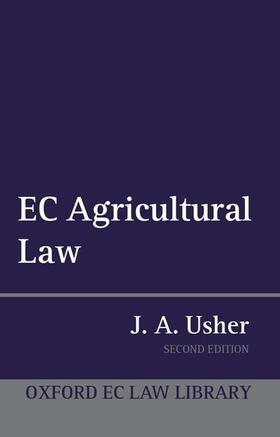 While much has been written on the Common Agricultural Policy from the perspectives of political science and agricultural economics, it is as true now as it was in 1988 when the first edition appeared to say that little has been written in English on the specifically legal issues which arise from the CAP. Despite this apparent neglect, the CAP lay behind many of the institutional developments in the EC, as well as its system of finance, and it is also an area where
the introduction of the euro has had a particularly marked effect. Agricultural goods formed the first single market in the EC, and agricultural legislation forms the background to much of the European Court's case-law on the relationship between EC law and national law, and it is also within this
context that the Court has developed (and is developing) many of the general principles of EC law. Furthermore, the CAP is an area which has more recently been influenced by broader international agreements, notably the WTO Agreement on Agriculture, but it is also an area in which EC policy has in fact been found to conflict with WTO law, notably with regard to the market in bananas, and with regard to the prohibition on hormones in beef.

The aim of this book is to explore the legal issues arising from the CAP at a time when it has undergone a major change of emphasis from product support to producer support, and to set out the principles underlying what remains a complex web of legislation.

Usher, John A.
John A. Usher is Salvesen Professor of European Institutions at the University of Edinburgh