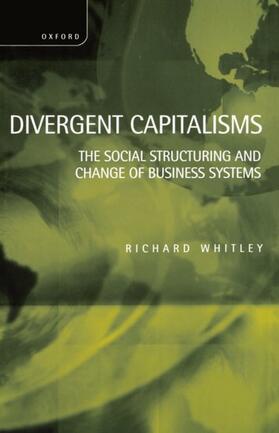 The late twentieth century has witnessed the establishment of new forms of capitalism in East Asia as well as new market economies in Eastern Europe. Despite the growth of international investment and capital flows, these distinctive business systems remain different from each other and from those already developed in Europe and the Americas. This continued diversity of capitalism results from, and is reproduced by, significant differences in societal institutions
and agencies such as the state, capital and labour markets, and dominant beliefs about trust, loyalty, and authority.

This book presents the comparative business systems framework for describing and explaining the major differences in economic organization between market economies in the late twentieth century. This framework identifies the critical variations in coordination and control systems across forms of industrial capitalism, and shows how these are connected to major differences in their institutional contexts. Six major types of business system are identified and linked to different institutional
arrangements. Significant differences in post-war East Asian business systems and the ways in which these are changing in the 1990s are analysed within this framework, which is also extended to compare the path-dependent nature of the new capitalisms emerging in Eastern Europe.