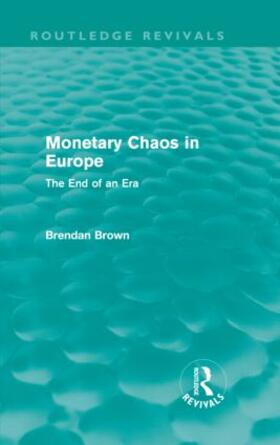 The End of an Era

First published in 1988, this reissue reconstructs the reaction of financial markets to war, defeat, and revolution in Europe, from the assassination of Archduke Franz Ferdinand in June 1914, to the bankruptcy of Germany in July 1931. Dr. Brown demonstrates how the contemporary investor can improve the wisdom of his decisions by gaining an understanding of the financial history of these years. He also demonstrates how the skilled investor might project different political and economic realities and estimate their probability of recurrence.In his reconstruction work, Brendan Brown has undertaken extensive research into the financial press in the various European countries, seeing this as a prime clue to the mood in markets at the time. The findings will interest not just economists and financial specialists, but also readers keen to improve their understanding of the political and social events of the period.

1. After Sarajevo - will there be war? 2. War, peace rumours and currency speculation 3.Life and death for the Austro-Hungarian crown 4. Weimar, Poincare and the Mark's destruction 5. The Wall Street - Berlin Axis