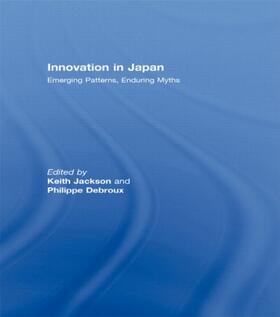 The Japanese economy has made a remarkable recovery from the so-called ‘Lost Decade’ of the 1990s. This said, demographic trends suggest that Japan will have to show remarkable powers of innovation if it is to continue to prosper in the global economy. For, around the turn of the last century texts published by prominent strategy analysts such as Michael Porter and colleagues were asking whether Japan could continue to compete at all, and in answering this question they not only gained significant global attention, they also appeared to sound the death knell for strategic innovation in Japan.

This collection helps put the record straight. It invites authors and editors of previous (Routledge) titles on the topic of ‘Innovation in Japan’ to reflect on how things have moved on – prominent scholars on Japanese innovation such as Martin Hemmert, Cornelia Storz, and Ruth Taplin, all of whom appear in this collection. It brings together fresh perspectives on Japanese-style innovation, from insiders and from outsiders, from scholars and from practitioners, all of whose combined contributions to this book update our understanding of how patterns of innovation in Japan are evolving and thus provide inspiration and guidance for managers and innovators worldwide.

Jackson, Keith
Keith Jackson is a tutor and researcher at The School of Oriental & African Studies (SOAS) – University of London. He also works freelance as an HRM consultant in Europe and Asia. He is book reviews editor of the Taylor Francis journal ‘Asia Pacific Business Review’ (APBR) and co-editor of the Routledge ‘Working in Asia’ series. Recent publications include ‘The Changing Face of Japanese Management’ (2004, Routledge).

Philippe Debroux is Professor of International Management at Soka University, Japan. He is also international reviews editor of the Asia Pacific Business Review (APBR), one of several journals in which he publishes regularly. Recent publications include ‘Human Resource Management in Japan: Changes and Uncertainties: A New Human Resource Management System Fitting to the Global Economy’ (2003, Ashgate). He is currently conducting research into female entrepreneurship in Japan.