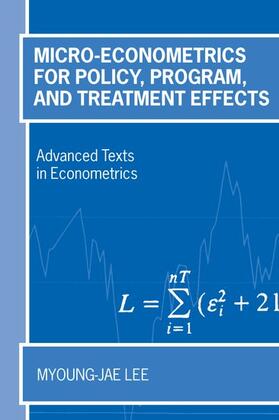 A basic way to measure the treatment effect is to compare two groups, one of which received the treatment and the other did not. If the two groups are homogenous in all aspects other than their treatment status, then the difference between their response outcomes is the desired treatment effect. But if they differ in some aspects in addition to the treatment status, the difference in the response outcomes may be due to the combined influence of more than one factor. In non-experimental data
where the treatment is not randomly assigned but self-selected, the subjects tend to differ in observed or unobserved characteristics. It is therefore imperative that the comparison be carried out with subjects similar in their characteristics. This book explains how this problem can be overcome so the
attributable effect of the treatment can be found.

This book brings to the fore recent advances in econometrics for treatment effects. The purpose of this book is to put together various economic treatments effect models in a coherent fashion, make it clear which can be parameters of interest, and show how they can be identified and estimated under weak assumptions. The emphasis throughout the book is on semi- and non-parametric estimation methods, but traditional parametric approaches are also discussed. This book is ideally suited to
researchers and graduate students with a basic knowledge of econometrics.

Researchers and graduate students in social sciences, statistics, and epidemiology.