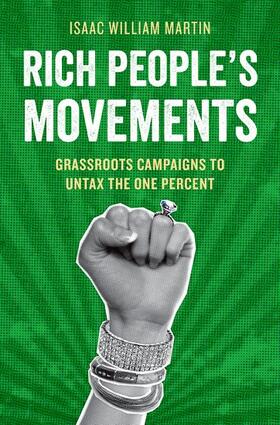 Grassroots Campaigns to Untax the One Percent

On tax day, April 15, 2010, hundreds of thousands of Americans demonstrated with signs demanding lower taxes on the richest one percent. Where do protest movements like this come from? Rich people are an unpopular minority with plenty of political influence. Why would rich people need to demonstrate in the streets to demand lower taxes-and why would anyone who wasn't rich join in the protest on their behalf?

Such rich people's movements are hardy perennials of American politics. Ever since the ratification of the Sixteenth Amendment in 1913, they have emerged whenever public policies are perceived to threaten the property rights of rich people. The protesters on behalf of the rich have picked up the protest tactics of the poor and powerless because they have been organized and led by activists who have acquired their skills and protest techniques from other social movements, from the Populists and
Progressives of the early twentieth century to the feminists and anti-war activists of the mid-twentieth century.

At times when conservative Republicans are in power, rich people's movements have helped to bring about some of the biggest tax cuts for the rich in American history. This is the untold story of the tax clubs and Tea Parties that have shaped American politics and policy for the last hundred years.

Martin, Isaac
Isaac William Martin is an associate professor of sociology at the University of California - San Diego. He is the author of The Permanent Tax Revolt, and co-editor of After the Tax Revolt: California's Proposition 13 Turns 30 and The New Fiscal Sociology.